More Names Than One: Fiction Made Real 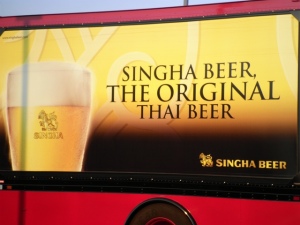 The other day I was getting gas when a truck pulled up next to me. It looked familiar in a dream-like way, but I didn’t think anything of it. It wasn’t until I started driving away that it dawned on me what I was seeing. A truck delivering Singha beer. I’d needed a Thai beer for my novel More Deaths Than One and just picked the name out of a guidebook, but somehow it didn’t seem real. At least not until I saw that truck. Here is the excerpt from the novel where I mentioned the beer:

In his short-sleeved shirt imprinted with red, green, and yellow parrots, Bob felt like a tourist. He even found himself gazing around as if he’d never visited the place before.

He saw a couple of the other regulars, a German and an American—both mercenaries—but most of the people were strangers to him, including the four men sitting at the next table. They seemed to be Americans of the right age to have fought in Vietnam. A man in a Yankees baseball cap waved his arms for emphasis.

“I did my job,” Bob heard him say. “Then I got out and continued on with my life. Everything’s great. My life is full. It happened so long ago. I don’t understand what the big deal is.”

The haunting strains of “Hey Jude” filtered through the room.

“What are you going to have?” Kerry asked.

“A Singha in honor of Harrison. It’s a local beer he liked. Also a hamburger with fries.”

When a giggling young waitress approached, Kerry ordered hamburgers, fries, and Singhas for both of them.

Setting them on the table, he gave Bob a penetrating glance. “It is you. I wasn’t sure at first. How’ve you been—”

Before Hamburger Dan could speak his name, Bob said quickly, “Gandy. I’m Rick Gandy and this is Julie Walsh.”

Hamburger Dan’s eyebrows rose. “I see. Does this have anything to do with the two men sitting in the booth across the room?”

Bob lifted his drink to his lips and gazed over the top of the mug. The men in question leaned back in their seats with studied nonchalance, but their eyes were hard and way too alert—cop’s eyes.

“Right. They’ve been in and out for the past six weeks or so, but after you called they started spending a lot of time here.”

“Something you should know. Your phone is tapped.”

Hamburger Dan stiffened. “What’s going on? What are you involved with?”

“You?” Hamburger Dan had the grace not to smile, but Bob could sense his incredulity.

Seeing the light of battle in Kerry’s eyes and her mouth opening to come to his defense, Bob laid a hand on her knee. She closed her mouth, but her jaw remained set.

The waitress brought their hamburgers. The delicious aroma of grilled meat made Bob’s stomach growl with hunger.

“I’ll leave you to your food,” Hamburger Dan said. “I shouldn’t stay here too long anyway, don’t want to draw the attention of your friends.”

Kerry’s gaze followed him as he moved off, then it shifted to Bob.

“How come he talked to you like that? Doesn’t he know you’re the Bob Noone character in Dark Side of Heroes?”

“I doubt it. Now that Harrison’s gone, you’re probably the only one who knows. And if by chance Hamburger Dan does know, he still wouldn’t be impressed. He’d think Noone was a wimp.”

“Oh.” She took a big bite of her hamburger and ate it slowly. “How did you come up with the names Rick Gandy and Julie Walsh?”

“They slipped out. I decided we shouldn’t advertise the names we’re traveling under.”

“Good thinking.” She chewed on a French fry. “I’m beginning to have as many identities as you. It’s confusing.”

Bob nodded. Munching on his own hamburger, he let his glance fall on the other bar patrons.

“Mike seemed like a brother to me,” the man in the Yankee baseball cap said, tears brimming over. “I tried to save him, but there was nothing I could do.”

The men with the cop’s eyes stood, took a final look around, then sauntered out of the bar, still main-taining their casual air.

As he continued to eat, he could hear the gaunt man playing “Let It Be.”

More Deaths Than One is available at Amazon, Smashwords, and Second Wind Publishing.

One Response to “More Names Than One: Fiction Made Real”