Floundering in a Sea of Sorrow 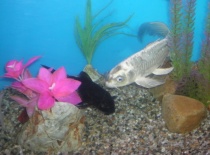 A friend sent me a link to website describing grief as walking a tightrope back to life, which is an interesting metaphor, but doesn’t fit with what I’ve been feeling lately. Mostly it seems as if I am bobbing on a sea of sadness, going with the flow, accepting what has happened to both me and my deceased life mate/soul mate, then suddenly I start floundering and, occasionally, I feel as if I am foundering.

The verb flounder means to struggle, to make clumsy efforts to move or regain one’s balance, much like a fish out of water. The verb founder means to fail utterly, to collapse, and comes from a Latin word meaning “bottom.”

I seldom feel as if I am reaching bottom any more, though sometimes, grief catches me unaware and I feel as if I am once again drowning in the sea of sadness. Those times confuse me, because after two years and three months, I feel as if I shouldn’t still become so submerged in sadness. Luckily, though, my times of feeling as if I am foundering don’t last long. My times of floundering, however, are still fairly frequent. A few days can pass without an up swell of grief, and then for no reason I can fathom, I begin floundering again, and have to try to regain my balance.

Even though I’m becoming used to his absence, his goneness still confuses me at times. How can such a vital human being be gone from my life, gone from this earth, just . . . gone? And why do I still miss him? Shouldn’t I be over him? Accept that he is gone and get on with my life? But grief doesn’t work that way, or at least, my grief doesn’t.

He was a big part of my life for more than half my years. Almost everything I own belonged to the two of us. I have a few things that predate his appearance in my life — my car, some household goods — but everything else reminds me of him. He was my best friend, the one person to whom I could say anything, no matter how shocking the rest of the world would find my musings. Oddly, he is still the only person I can talk to, though I do find it pathetic at times that the only one I have to converse with on a regular basis is a dead guy, especially since he doesn’t keep up his end of the conversation.

I am getting on with my life, though I seem to be missing something — verve perhaps, or buoyancy. Even when things were going wrong, our togetherness brought lightness to my life, and I don’t know how to find that in myself. I feel heavy-hearted and lead-footed, as if every movement takes more effort than it should. I suppose it’s just a matter of getting used to this weightiness as well as his goneness and my loneliness and everything else I have to get used to.

And I will get used to it all. My good days, my days of going with the flow show me that it’s possible. And then I flounder, and I wonder how I ever managed to get as far as I have without foundering.

Like Loading...
Posted in culture, grief, life. Tags: drowning in sadness, foundering vs. floundering, grief and loss, grief as a tightrope, grief at two years. 12 Comments »

12 Responses to “Floundering in a Sea of Sorrow”

« Have you ever had difficulty killing off a favorite character in your story?
Grief and the Double Standard of Love »
Loading Comments...
%d bloggers like this: