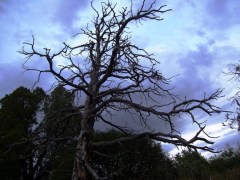 Today marks the thirty-fifth month since the death of my life mate/soul mate, yet today is a day like any other. There is no particular upsurge in grief, no particular focus on his death or my loss (two separate things).

This “acceptance” of the day is not a positive step forward so much as the combination of a couple of non-related factors. For one, I’m dealing with a major sinus infection, and upsurges in grief and upsurges in ill health don’t seem to happen at the same time, probably because both take an enormous toll on the body so one gives way to the other.

Even old grief, grief that is past the first year of raw pain, is stressful because you walk an unsteady path in an alien world, and you have to make mental compensations to travel that path, the same way you have to make physical compensations if your ankle is broken. During that first year, a person who has lost a spouse has 25% higher death rate from all causes than those who are not grieving, and even beyond that first year, the bereft seem to have a higher rate of illness since the stress of grief affects the immune system. (Sometimes it even seems as if there could be a bit of body/mind interaction, where the mind gets tired of grieving, and so allows the body to become sick, though that isn’t what happened in my case since I haven’t had a major upsurge of grief in a while, just upswings of sadness.)

The other factor involved in making this day less emotional than expected is that I’m looking after my aged father, who has taken a turn for the worse, and I find myself falling into the same mindset I had when I watched my life mate/soul mate die. In such a case, you take a step back from your emotions, wait to see what happens, do the best you can in any crisis, and bear the burden of helplessness as lightly as possible.

Seeing myself getting into this mental state again makes me realize that I did the best I could three years ago, that so much I regretted or felt guilty about was beyond my control. I’d worked past those concerns, so they haven’t been haunting me lately, but now I have a graphic illustration of truth. I did the best I could for him, just as I will do the best for my father.

The thing I regretted most about my mate’s death is that I took it for granted. He was ill for a long time, and after a while, his dying became a way of life. I see that happening again, that my father’s aging and inevitable dying is becoming a way of life. My life.

The odd thing for me is that I’ve spent the last three years trying to embrace life again, to get away from the stasis of dying and grief, but now, willy nilly, I am back in neutral. Not looking forward. Not looking back. Just taking life each day as it comes, even if the day marks the thirty-fifth month of my grief.

6 Responses to “Grief at Thirty-Five Months”