Grieving for the Dead

The conventional wisdom is that we grieve for ourselves, not the person who died, but as with any other idea most people have about grief, it is only partly true. When it comes to a soul mate, we often grieve for him as much as we grieve for ourselves. During our shared time, we cared as much about him, his well-being, his happiness as we did about our own, and that caring does not stop with death.

Many people still feel their soul mate’s presence, sometimes in a beneficial way, as a blessing or as a helping hand, but others feel their mate’s unhappiness. One woman, whose husband spend his last months connected to gastric tubes and other painful devices, continued to feel his anger long after he died. He’d been furious with her for agreeing to procedures that prolonged his suffering, and she was ridden with guilt because of it. (Though what other decisions about his care could she have made? He could not talk, and the doctors assured her he would get better if they performed those operations.) For more than a year after his death, she could still feel waves of anger directed at her. Perhaps the anger was a symptom of her guilt, but perhaps part of him still harbored those feelings. We hope our loved ones are at peace, but what if they’re not? 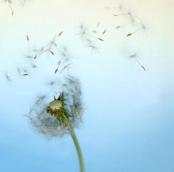 the great agonies of losing one’s soul mate is not knowing where he is, how he is, if he is. I found comfort in believing that my life mate/soul mate wasn’t suffering any more, that he, at least, wasn’t having to deal with the pain of our disconnect, but then one day it struck me that I didn’t know that for sure. Since I had no sense of his continued presence in my life, I had no conception of what he might be experiencing. What if he were feeling just as lost and lonely and bereft as I was?

I had to put such thoughts out of my head because I truly could not bear to think of him in pain. I was still grieving for all the suffering to which he’d been subject during his final days, weeks, months, still grieving for his hopes that never came to fruition, still grieving for the dreams that died with him. Perhaps it was silly of me to grieve for him, since it’s entirely possible he wasn’t grieving for himself, but still, those thoughts were there, complicating my grief.

It’s been a few days more than three years since he died, and sometime during those grief-filled months, I began to disconnect from him, to understand that whatever relationship we had, however much we shared, no matter how much it felt as if we were cosmic twins, we were still two separate people on two separate journeys. This is an important realization and a necessary step to mental health and eventual happiness, but the habit of thinking of him is still strong, and I wonder where he is, how he is, if he is.

I hope he is happy, fulfilled, challenged, radiant. I wish those things for myself, and I can wish no less for him.

Pat Bertram is the author of the suspense novels Light Bringer, More Deaths Than One, A Spark of Heavenly Fire, and Daughter Am I. Bertram is also the author of Grief: The Great Yearning, “an exquisite book, wrenching to read, and at the same time full of profound truths.” All Bertram’s books are published by Second Wind Publishing. Connect with Pat on Google+

Like Loading...
Posted in culture, grief, life, relationships. Tags: death of a soul mate, do the dead feel grief, grief and loss, grief and love, grieving for the dead. Leave a Comment »