During the past couple of years, I’ve been blogging about my yearning for an epic adventure. I’ve talked about walking up the Pacific coast, thru walking the Pacific Crest Trail, getting a small camper to roam the country and visit all my online friends. The last I might still do, but the first two are supreme athletic feats for which I simply do not have the feet. (Or the body, either!)

To me, an epic adventure is more than an athletic feat. It is a transcendental experience, one that allows us to transcend our daily experience, going beyond what we know, and somehow being transformed in the process. Such an endurance test would include physical challenges and encompass the whole range of human emotions. 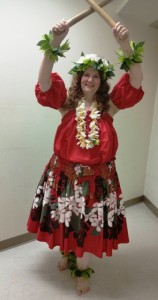 And such an epic adventure came looking for me.

My Hawaiian dance class was invited to participate in a dance concert put on by the local college. Our teacher picked out two numbers — “Green Rose,” a Kahiko chant, and “Nani Wali Nahala,” a dance using bamboo sticks. (Have you ever seen Donovan’s Reef where the dancers danced with sticks? Our dance was faster and more complicated, but you get the idea.) Then we practiced. And practiced. And practiced.

I don’t know if I’ve ever mentioned that I’m musically challenged. My ears hear all the various strains, themes, and tracks of a song as a single entity. It’s very difficult for me to pick out a beat or single note from the mélange. And yet, I was chosen to lead the class out on stage. (It had nothing to do with expertise. It was more of a height thing — the woman at the other end of the stage was the same height as I was, and I happened to be there for all the practices.)

I did learn to pick the right note, count the requisite number of beats before heading into the limelight, and keep time while leading the way, yet it was always an adrenaline-filled, nerve-jangling moment when I made my entrance, whether in class or in d

This epic adventure spanned five days. Our class’s dress rehearsal on Wednesday. The dress rehearsal for the entire cast on Thursday (a nine-hour endurance test, mostly boredom interspersed with moments of heart-pounding and palm-sweating nervousness when we lined up for our turns). Two performances on Friday. One performance on Saturday evening. A Sunday matinee.

By the end of the day on Thursday, and even after the first show on Friday morning, some of us were wondering if the whole thing was worth it, but by Friday night we got into stride (it helped that as soon as I stepped on stage, we got a big round of applause. Sure made smiling easier!). Saturday slipped by as if this were our new life, and Sunday, though fun, was simply another day. The stage had become our life. Then it was over and somehow we had to come back to our normal lives.

Such an epic adventure, encompassing as it did the endurance test of waiting for our turns, the physical feat of dancing, the emotional highs and lows — fun and boring, exhausting and exhilarating, challenging and nerve wracking — had to have changed us somehow. Well, changed me anyway. The others have done such marathon concerts before, but it was a first for me. (Me? Dancing on stage? Seems unreal, to be honest.) Change ripples into our lives, creating a new reality. The odd thing is, I might never notice it. Change might rock our world, but since we rock with it, we are always on sure footing.

Oddly, the thing that made it all seem worthwhile for me during that second interminable day of dress rehearsal, is that whenever any of us questioned why were we doing such a thing, I’d look at us and say with a smile, “but we look so adorable.” And maybe something as simple as that is what keeps one moving ahead on an epic adventure. Because, of course, we did look adorable. It might even have been part of the adventure. We are all long past the “adorable” stage of our lives, and yet, here we are (I’m the second face from the right): 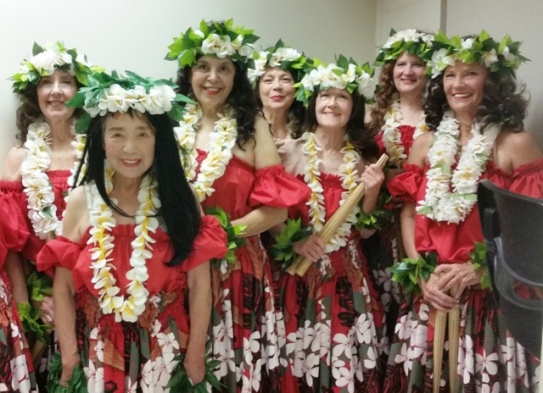 9 Responses to “An Epic Adventure”