We Are Not Our Stuff

Strange day today. I packed what was left of Jeff’s things, both the items he asked me to save and the items I still can’t get rid of such as the sweater he was wearing when we met and his “new” jacket. I’ve had his antique perpetual 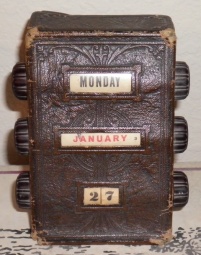 calendar and several of the smaller items on my dresser ever since I got here to my father’s house. They brought me comfort then, and I thought I would feel sad now that they are packed away, but it just seems part of the process of my moving on.

Only two things caught me off guard. I have two original copies of his death certificate, and I opened the envelope to pull out one so I could put it with my papers to make it more accessible if I need it, and in the envelope I found the certificate of cremation. Did I ever read it? Did I ever know it was there? I can’t remember, but oh, the pain when I read those stark words today. “This is to certify that the remains of ____________ were cremated by authority of Pat Bertram.” Cripes. Even worse was the label they gave me to put on the urn if I ever traveled with those remains: This package contains the remains of _______________ whose body was cremated on March 31, 2010. Apparently, it’s illegal to travel with unmarked human remains. Well, that’s just too bad. One of these days, I will figure out what to do with those remains, and I sincerely doubt I will be labeling him (it? them?) like a commonplace parcel. (Unless you are on the human remains regulatory committee, then of course I will be labeling them.)

But the pain of dealing with his remains is reserved for another day. Today, after I packed up what is left of his possessions, I hesitated, not sure how to label the box. If he were alive, of course, I’d just put his name on the carton, but I didn’t want it to seem (even to me) as if he were inside that box. We are not our stuff. In the end, I just wrote, “J’s things.”

One amusing note (amusing to me, anyway). When I came here after Jeff’s death, a local mover gave me a great rate since his driver was going to be passing this town, and he had empty space in his moving van. I asked him if he would come pick the stuff up when I was ready to leave, and mentioned that there would be less to move back. He laughed and said, “That’s what everyone says, that they are going to get rid of things, but they always end up with more.” Not me. I have done a good job of getting rid of stuff. By the time I figure out where I want the stuff moved, I hope I will have gotten rid of even more.

Pat Bertram is the author of the suspense novels Light Bringer, More Deaths Than One, A Spark of Heavenly Fire, andDaughter Am I. Bertram is also the author of Grief: The Great Yearning, “an exquisite book, wrenching to read, and at the same time full of profound truths.” Connect with Pat on Google+. Like Pat on Facebook.

3 Responses to “We Are Not Our Stuff”