Right before he died, Jeff told me that since I had written such good books, it was my responsibility to see that they sold. I’m glad I don’t have to admit to him how dismally I am doing, especially with Light Bringer. Light Bringer was originally published as a memorial to him on the first anniversary of his death, and republished a few days short of the anniversary five years later. Although the book had been written while he was still alive, it was the first novel I wrote that he didn’t get to read, so I’d like others to read it in his place, hence this spate of blog posts about this special book.

Light Bringer begins ordinarily enough with strange lights in the sky, a way too precocious baby, NSA agents coming to the door of a man’s apartment, the man being rescued by an invisible owl-like creature and miraculously finding himself in the same town where a youngish woman is searching for the mystery surrounding her birth. (These sorts of “ordinary” things do happen to you every day, don’t they?)

It ends with the two protagonists, a bevy of antagonists, a ghost cat, the invisible owl man, and a whole slew of conspiracy theorists all clashing in a resounding riot of color in a secret laboratory far underground in Western Colorado. Whew! I didn’t give anything away, but I didn’t exactly get this into a one-sentence response as to what Light Bringer is about.

If I tell people Light Bringer is my magnum opus, they get a glazed look in their eyes, but the truth is, I spent my whole life doing research for this book, though of course, I didn’t know the research would culminate in a such a story. I just went where the research took me.

As I’ve mentioned before, there is no true genre for this novel. Talk of crashed space ships and aliens make this seem like science fiction, but oddly, the book was never meant to be anything other than a way of putting together the puzzle of our origins, relying heavily on Sumerian cosmology and modern conspiracy myths.

In “Light Conquers All,” a guest post I did for Malcolm R. Campbell, author of Jock Stewart and the Missing Sea of Fire, The Sun Singer, and the proud owner of even more blogs than I have, I talked about the plot demanding “extensive information about mythology, conspiracies, UFOs, history, cosmologies, forgotten technologies, ancient monuments, and color. Especially color. Color is the thread connecting all the story elements, and all the colors have a special meaning. (You can find a brief listing of color meanings here: The Meaning of Color.)”

L. V.Gaudet, author of The McAllister Series, reposted her review of Light Bringer today to help me bring attention to the book. Check it out on her blog:  https://lvgwriting.wordpress.com/2017/11/18/book-review-light-bringer-by-pat-bertram/. 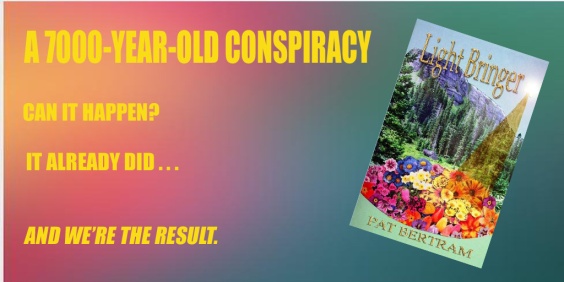 Click here to read the first chapter of Light Bringer.

One Response to “Shedding Light on LIGHT BRINGER”