Past the Coyote Den

Yesterday was such a lovely day — cool temperatures, warm sun — that I decided to ramble in the desert. A friend who’d seen one of my previous posts told me about a place where water, perhaps from the Mojave River, had made its way to the surface, and I wanted to see this miracle. Supposedly, a few cactus grow around the guzzler, so I figured I shouldn’t have trouble finding a spot of green in all that taupe. Since I didn’t like the sound of her directions — go past the coyote den, and then leave the trail and climb a snake-infested hill — I decided the best thing was to ascend the highest hill and search for anything growing.

All I found were a few scrawny creosote bushes and gorgeous views.

And boulders. Lots of boulders.

I started to descend one hill, then stopped and looked around, enjoying the solitude, and I saw a sign that stunned me. 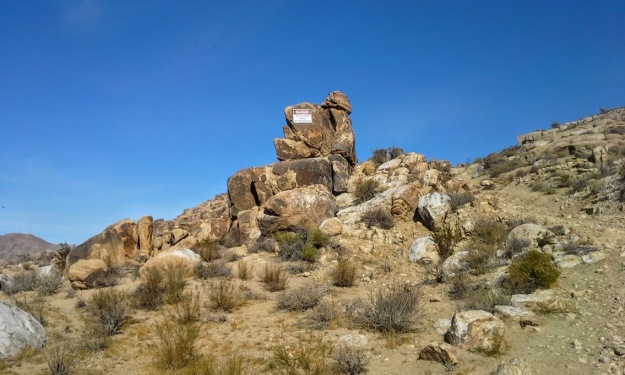 Active firing range? Yikes. I knew the gun club was far below me — I’d been there a couple of times to participate in their Women on Target program, and besides, I could often hear the pop of guns when I was out roaming the desert — but I didn’t know it could be dangerous so high up. I scurried on down the path away from the sign and up to another hilltop where I had a good view of the desert across the street from where I’ve been staying. Although the knoll looks like an elongated pyramid from this view, from where I sit at the moment, it looks like a lot of rocks and jagged peaks.

Since the hardest part of my recent hikes have been the mile-long return trip on city streets, I decided to pick my way around a gated community (the houses the far left of the pyramid photo toward the bottom), across the pyramid, and then down. There wasn’t a path as such — mostly I had to make my own trail through bushes and over rocks. (Not something I would ever do in snake season!) But I did manage to escape that long tarmac trek. When I exited the desert I simply walked across the street and up the driveway. 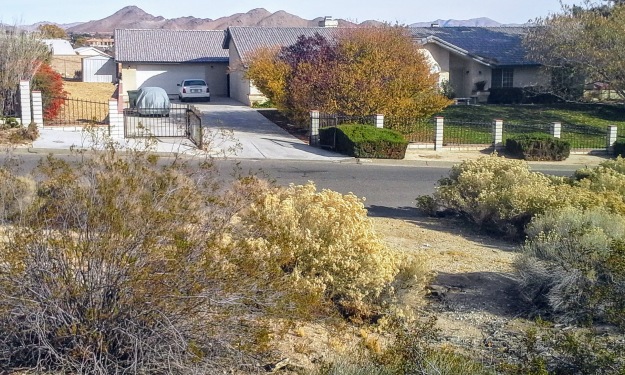 4 Responses to “Past the Coyote Den”