The Gift is in the Preparation

I woke this morning to the sound of wind squeaking through my ill-fitted bedroom window.

(Hmm. Wind. Window. Is there a relationship here? Be right back; I need to check the etymology of window. Yep. They’re related. Window comes from Old Norse words vindr meaning wind and auga meaning eye. So a window is a wind eye, or a wind hole. The earliest mention of window came early in the 13th century, and it meant an unglazed hole in the roof. So originally a window let in the wind and now it keeps it out?)

I snuggled under the covers, thinking that I’d take a zero day today. (A zero day in backpacking terms is a day when no miles are gained.) Then I remembered my weekends are supposed to mimic a backpacking trip, and if I were really out in the wilds, I’d have to keep on the move. (Or not. There is that zero day thing.)

I remembered also that I only have these three days each week to condition myself to carrying a pack, since I have dance class the other four days. (I still hope for grace and balance from dance. It could happen.) And I need all three backpacking days to get used to carrying extra weight.

So, I got dressed, shrugged on the pack and headed into the wind. Yikes. Cold! And gusty. Some of those gusts were so strong they almost blew me over. But I did it — trudged four miles, teetering in the wind, with twenty-two pounds on my back — and I realized that though the goal might be to backpack on the Pacific Crest Trail, the gift is in the doing. It was hard going today, but what a thrill to be on my feet, moving through the blustery air, racking up the miles. Admittedly, four miles isn’t exactly “racking up the miles,” but still, to be able to walk any distance is a true wonder.

It seems funny that I’ve been thinking, writing, talking about the Pacific Crest Trail for so many years — four-and-a-half years since my first mention of the PCT, four years since my first hike on the trail — but until this very year, I never actually strapped on a backpack to try to train myself for such an epic hike.

I still don’t know if I can do any long distance sauntering, but as I discovered today, the PCT is the goal. The gift is in the preparation. And that, for sure, I can do — even on a windy day. 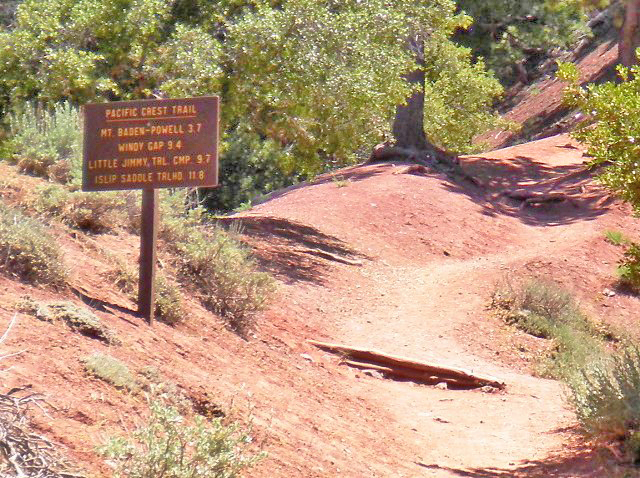 I still remember seeing this sign and taking the photo when I was on a different outing (to find the San Andreas Fault). I was so excited to see evidence of this mythical trail that I walked up the path a bit, but then I had to turn around because neither of my companions had any interest in the trail at all. I’ve done many day hikes since then, but still no overnights. That fearful joy is still to come.

2 Responses to “The Gift is in the Preparation”