UNFINISHED is on Sale at Amazon!

If you have a stack of Amazon gift cards that are burning a hole in your pocket, the paperback edition of my novel Unfinished is on sale today. 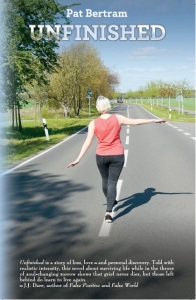 The story: Amanda Ray thought she’d grow old with her pastor husband David, but death had other plans. During David’s long illness and his withdrawal from her, Amanda found solace in the virtual arms of Sam Priestly, a college professor she met at an online support group for cancer patient caregivers. Amanda thought that when their spouses were gone, she and Sam would find comfort in each other’s arms for real, but though David succumbed to the cancer that riddled his body, Sam’s wife, Vivian, survives. Vivian had been in the process of divorcing Sam when she fell ill, and after the diagnosis, Sam agreed to stay with her until the end. Since Sam plans to continue honoring his vow, Amanda feels doubly bereft, as if she is mourning two men.

Rocked by grief she could never have imagined, confused by her love for Sam and his desire for her to move near him, at odds with her only daughter, Amanda struggles to find a new focus for her suddenly unfinished life. As if that weren’t enough to contend with, while clearing out the parsonage for the next residents, Amanda discovers a gun among her devout husband’s belongings. Later, while following his wishes to burn his effects, she finds a photo of an unknown girl that resembles their daughter.

Having dedicated her life to David and his vocation, this evidence that her husband kept secrets from her devastates Amanda. If she doesn’t know who he was, how can she know who she is? Accompanied by grief and endless tears, Amanda sets out to discover answers to the many mysteries of her life: the truth of her husband, the enigmatic powers of love and loss, and the necessity of living in the face of death.

Although the feelings of grief Amanda experiences are based on my emotional journey during my first two months of profound grief, the story itself is fiction. I can’t imagine what it would be like to have to deal with not only the loss of one’s mate, but the loss of the idea of one’s mate. Well . . . yes, I guess I can imagine how it would feel, because I wrote the novel! I hope you will read UNFINISHED. It’s an important book because too few fiction writers portray the truth of new grief, and that lack leaves the newly bereft feeling isolated and as if they are the only ones dealing with grief’s craziness.

You can purchase the print version of UNFINISHED (published by Stairway Press) here: https://www.amazon.com/dp/1941071651/