I’ve lived in towns of various sizes all my life. (Although Denver is now considered a big city, back when I was growing up, it was proud of its “Cow Town” appellation.)

But my current place of residence is by far the smallest town I’ve lived in, and although I worried about insularity, the people have been nothing but welcoming. (I think one of the reasons for the welcoming attitude here is that not only are the people very nice — to me, at least — the town has been on a downhill slide for many years. New people are buying old houses and fixing them up, which helps maintain the small-town friendliness. There is no new development bringing hordes of non-rural folks to the area.)

And I fit in from the very first day.

I was attending an Art Guild meeting the other day, and when I asked a question about an upcoming event, one woman said, “It’s the same as last year.”

“I’ve only been here six months,” I responded. She seemed taken aback and said something to the effect that she hadn’t realized I hadn’t been here very long since I was so active in the group. Another woman laughed and said that she dragged me to a guild meeting after I’d been here just a couple of days.

My comment, “Didn’t you feel a change in the atmosphere about six months ago when I came here? Your lives will never be the same!”

Truthfully, it’s my life that will never be the same.

In the upcoming election, two women are running for city council, and I know them both, which I find fascinating considering the short time I’ve been here. One of the women is the daughter of the woman I bought the house from. (The woman I bought the house from is the Art Guild president, but she’s not the one who dragged me to that first meeting.) The other candidate is someone I met at porcelain painting class, a class I took specifically to meet people of different ages.

Most of my experiences here in this small town have been good ones. The only iffy experiences are of the insect variety. Lots of big red ants, which leave me alone. Even more mosquitoes, which don’t. 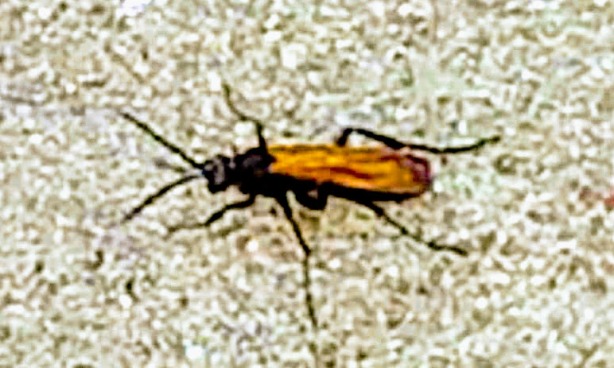 The most ambivalent experience by far is the tarantula hawk. Despite its name, and despite its size (the size of a hummingbird), this creature is not a hawk but a wasp. A two-inch wasp? Yikes! Supposedly, its sting is horrendously painful, but for the most part, it ignores humans. Tarantulas are its favorite prey. (I figure since the tarantula hawks are here already, I should be seeing tarantulas around, but not yet, though people assure me once it cools down, I will see them.)

On the plus side, I have seen a few butterflies.

The next few days, I am going to be ridiculously busy. Baking cookies for an Art Guild event on Sunday. Taking a gourd painting class Sunday afternoon. Going on a road trip with friends on Monday to the nearest city”. Porcelain painting Monday evening. A meeting at the museum on Tuesday to figure out how to do a Murder at the Museum” evening. Mexican Train Dominoes on Tuesday afternoon. Exercise class Wednesday morning.

It still puzzles me at times that despite all my confusion since Jeff’s death about how to create a new life for myself, it happened, almost without my volition. It’s as if I was pulled out of one life in the desert and plopped into a different life on the prairie without even a hiccup of loneliness. It helps that my next-door neighbor and I became immediate friends. But what also helped was my willingness to go to events and invite myself to sit with total strangers. Oddly, none of those strangers became my friends. I don’t even remember who they are, but making the effort put me in a place to meet others, including the woman who talked me into going to the Art Guild meeting.

A lot can happen in six months.