The Stockings Were Hung by the Heating Unit with Care

And I live close to the eastern edge of the mountain time zone.

Even worse, there are still three weeks until the end of the creeping darkness.

Usually I wait to put out my bowls of light until close to the winter solstice to celebrate the returning light, but this year, I need them early. Not only does the sun set at 4:30, the long twilights I remember from my previous years in Colorado seem to be missing (maybe because I am further south than where I used to live). So, full dark comes at 5:00. Yikes.

Yesterday I put out the bowls of light. 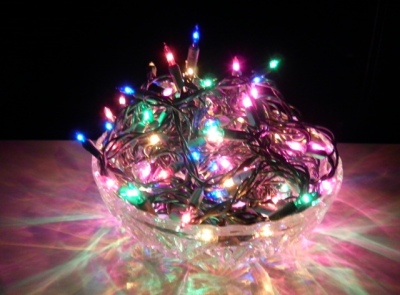 Today, I put up my Christmas trees. The red tree was a gift to cheer me up three years ago when I couldn’t go anywhere because of my destroyed arm, the green tree was my father’s. I hadn’t intended to bring it with me, but someone thought I needed it, because when my brother helped me move my stuff into a storage unit after my father’s death, there is was.

And now here it is.

One odd aspect of growing older is that everything has a story. Those trees, of course. The stocking that was hung above the heating unit with care was a gift from my sister about fifteen years ago that has been packed away. The bowls the lights are in used to be my mother’s. The table used to belong to an aunt, got handed down to my brother, and now it, too, is here. The red wreath started out as a hatband and will again become a hatband in another week or so. 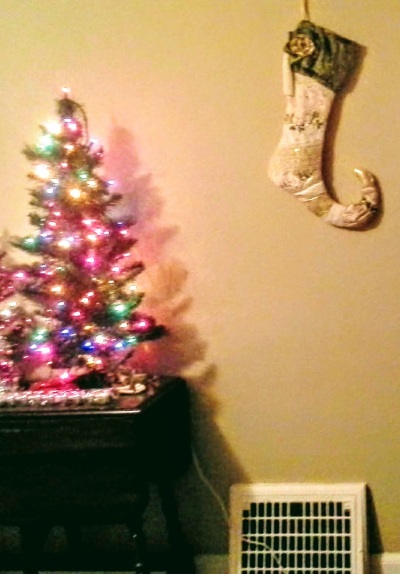 Every ornament has a story, too. Quite frankly, I had no idea I had so many ornaments — I haven’t had a tree for decades. I put up my father’s tree for him but decorated it with the cute felt nativity set I’d made for my mother when I was young. (It seems to have disappeared. I know she gave it back to me before she died, which is why I had it to use for my father’s tree, but I must have gotten rid of it during one of my storage unit cleansings.) I did recently buy some ornaments from an artist friend — the arabesque (onion shaped) ones — but mostly what I have are things I was gifted. A couple of things I found in with my ornaments, I don’t remember ever seeing before.

It might sound as if I get too attached to things, but if you knew how much stuff that I liked that I’ve gotten rid of over the years, you’d see that some things attach themselves to me, and those are the things I still have.

In this case, it’s good I have the stuff. I mean, first Winter Solstice/Light Festival/Christmas in my new house? Of course, I’ll decorate!!

Besides, it makes the long dark nights on the eastern edge of the time zone a bit brighter.

Like Loading...
Posted in culture, home, life. Tags: bowls of light, creeping darkness, decorating for Christmas, eastern edge of the time zone, every ornament has a story, hanging the stockings, winter solstice. 4 Comments »