Living on the Wild Side

Though not breathtaking by any means — certainly not like winning the Grand National or swimming the English channel or even thru-hiking the Pacific Crest Trail (as I had once hoped to do) — building a garage (or rather, having it built) is truly a folly when you consider that I’m depleting my savings to house an ancient car with a dubious lifespan.

That VW Beetle has already lasted forty-eight years, and though it runs well, there are parts that show its venerable age, such as a cracked dashboard that would cost a fortune in labor to replace, a horn that is taped in place, and a heater that doesn’t work well. (Of course, the heater never worked well, so that’s not exactly a big surprise.) 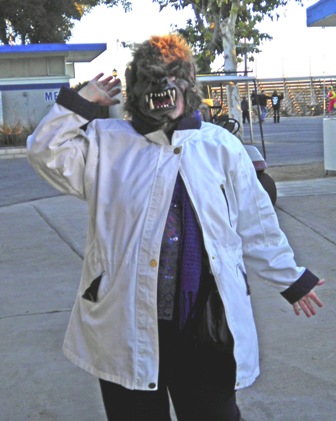 I suppose it’s possible that the garage will add to the value of this property, even considering the depressed property values here, but since that I plan to live out my days in this house, whatever extra money the garage would bring to the sale of the property would not accrue to me. So yes, definitely a folly.

Why not? Why not indulge in this bit of foolishness? I’ve always been frugal, so it worries me that in later years I might pay for my folly by being forced into a punishingly strict budget, but for now, why not live on the wild side?

Oddly, I never even knew I wanted a “dream garage.” Though perhaps I should have been forewarned. My parents bought a house that was too big for them in a place they didn’t particularly like because my father fell in love with the immense garage attached to the house. Even though the cavernous space could easily house six or seven VW bugs with room left over, they kept nothing in that garage but a single car. No storage. Nothing. (Well, maybe off in the corner were a few replacement tiles, and the water heater was there, but other than that, nothing.)

After he totaled his car (he passed out because of an undiagnosed heart condition) that garage was completely empty until I brought my stuff to store when I moved in to take care of him. Despite all that, he still found joy in the immense space.

My garage will not be anywhere near as big as his was — because of sewer pipes and gas lines, the widest it can be is fourteen feet — but it will certainly be large enough for my car, storage, the tools I am accumulating, and perhaps a workbench.

In an age where “decluttering” is the thing to do, and at an age where so many others are downsizing even to the point of getting rid of their house (and mortgage), I am upsizing. Cluttering my life with a house and furniture — things I never before had any desire to own.

And now a garage. A garage of my own! Makes me smile to think of it.

That joy alone is worth the price.

Like Loading...
Posted in home, house, life. Tags: a breathtaking piece of folly, Anne Revere, building a garage, cluttering vs decluttering, folly, living on the wild side, upsizing instead of downsizing. 6 Comments »

6 Responses to “Living on the Wild Side”