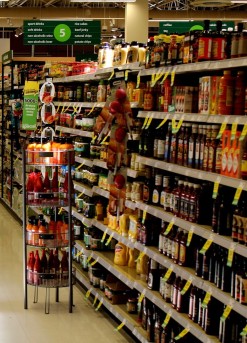 Grocery stores seem such prosaic places, with isles full of treats and temptations, and music that is supposed to put shoppers in the glad mood of buying.

And yet, for those grieving the loss of a life mate, grocery stores can be a source of incredible pain. It took one woman from my grief group more than a year before she could return to the store where she and her husband always shopped. For another woman, the grocery store was a reminder of how carefully she had to shop for her diabetic husband, and it took her months before she could shop without weeping.

When it isn’t a special occasion? We still frequently go to the grocery store to stock up on food and other necessities. Often a couple shops together. Even if a person goes alone, their mate is there too, if only in spirit, as the shopper choose foods their mate likes or might like.

Although they seem an almost constant presence in our lives, grocery store shopping trips are so common and matter-of-fact that we never of think of them in any context but what to eat.

But when your mate dies, suddenly a grocery store becomes a minefield. You automatically start putting his or her favorite foods in the basket, only to dissolve into tears when you see what you have done and realize . . . again . . . that he or she is gone.

I’d become used to going to the grocery store by myself during Jeff’s final weeks, and I’d become used to fighting off tears. We’d always shopped together, so during those weeks, the clerks, of course, inquired about him, and all I could do was shake my head and try not to cry as I said he wasn’t doing well. And when he was gone, the tears were my only response. It took me many months before I could actually say, “Jeff died”. Or “Jeff is dead.” The words simply would not form.

After a couple of months, I went to a different state to take care of my father. The grocery stores there were different enough that they had no emotional connotations for me. Then the grocery store I most shopped at for my dad went out of business, and I had to go to stores further away for the products he liked. I ended up in a store that strongly reminded me the one where Jeff and I shopped, so I left in tears.

I had to go the that store occasionally, so I got used to it and didn’t think much of it until about three years after Jeff died when I decided to buy a particular salad dressing I used to like that was only sold at that store. After I picked up the salad dressing bottle, I looked for some other flavors in that same store brand, wondering if I should try something new, and I saw a dressing Jeff liked. I automatically reached to get it for him, and when I realized what I was doing, suddenly, right there, in the salad dressing aisle, I started to weep.

Which, of course, is why I write about such prosaic things as shopping at a grocery store.

5 Responses to “Grocery Stores and Grief”