I was out pulling weeds, battling grasshoppers, and feeding mosquitoes (albeit unwillingly), when a when a white pickup pulled up to the house. The driver got out and started questioning me about my garage. He looked familiar, so I wasn’t unduly concerned, then it dawned on me — this was the building inspector.

He’d been checking on the garage occasionally, even after all the structural elements were in, which is where I thought his authority stopped, but apparently not. So I showed him the garage. To be honest, even if he was a stranger, I might have shown him the garage anyway — I do like that little building! In fact, I was talking to a friend the other day and when she asked about the garage, I said, “I love my garage.” She laughed and responded, “I bet twenty-five years ago you’d never have been able to imagine yourself saying that.” I had to admit she was right. Even as little as two years ago — or even one — I couldn’t have imagined saying those words let alone meaning them.

Well, that’s not true. I mean, it is true about my fondness for the garage, but I doubt I’d have let a stranger in to see it. Too many felonious fellows around here.

I was amused by the way the inspector studied my fake window. I’m not sure what he thought — that the builders had changed the plans after his last inspection? I told him it was just a decoration, a bit of artwork. He didn’t seem impressed, but he did say that a fake window was one sure way of keeping out thieves. (So see, I’m not the only one who is aware of the way things — tools especially — go missing around here.) He questioned about the electricity since he hadn’t inspected it before the walls went up, but the state had inspected it, and state supersedes county. I didn’t have a printout of the inspection report, but I offered to send him one, but he said he didn’t need to see it.

He also studied the framework of my gazebo. There was a fairly new concrete pad in front of the old garage, and after the garage was torn down, there the pad sat, screaming out for a roof. So I’m obliging. The lumberyard had overestimated the amount of materials for the lumber pack we’d ordered to build the garage so basically, the gazebo is free. Well, except for the labor. 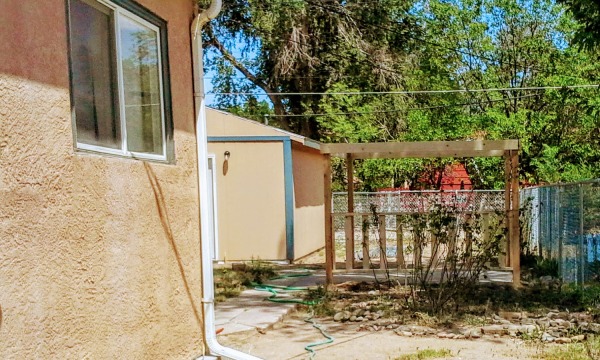 The inspector questioned me about my plans for the gazebo, so I asked if we needed a permit since my understanding was that we didn’t. “Not really,” he said. Whatever that means. Maybe that if he decided we needed a permit we did? He seemed satisfied when I told him the railings were all the walls there would be, and that it just needs a roof. (Apparently, it’s the enclosing of a space that makes it a building rather than simply something that is built.)

He might be back to inspect the gazebo when it’s done, but I don’t see a problem. I’m sure the contractor will make the roof windproof, using the hurricane connectors as he did with the garage. Because, yes, winds up to 90 miles an hour have been clocked around here, and yes, people do lose their roofs. (Rooves? As in hoof/hooves?)

Oh, I almost forgot — he said he was signing off on the garage and would be sending me the signed report.

There are still a few things that need to be finished, such as the gutters fixed, gravel poured in front of the garage to bridge the gap between the alley and the apron, and hangers need to be hung on inside walls for my tools, but apparently, for all practical and official purposes, the garage is done.

P.S. As I was writing this, one of the workers stopped by to move the counters I rambled on about yesterday. They really are too heavy for one person, even a strong person, otherwise he would have already moved them, but my knees are healed enough that I was able to help get them inside the garage. Yay! One more thing accomplished.