More Deaths Than One

This is the first Chapter of More Deaths Than One,  available from Indigo Sea Press. Click here buy from Amazon https://www.amazon.com/More-Deaths-Than-One-Bertram/dp/1630663719/

“What do you think of a guy who embezzles from his own business?”

Bob Stark recognized the voice of the graveyard shift waitress, the attractive one with the black hair. He glanced up from his contemplation of the scars on the laminated plastic table and saw her standing by his booth, gazing at him, her eyebrows quirked. She seemed to expect a response, but he had no idea what to say. And why would she ask him such a question? Though he’d been coming to Rimrock Coffee Shop for four weeks now, she’d never deviated from her standard lines of “What’ll you have?” and “Here you go.”

He took a surreptitious look around. Except for the two drunks arguing in a corner booth and a cook cleaning the grill in the kitchen, he and the waitress were the only two people in the twenty-four-hour coffee shop.

Beneath the overly long bangs, her dark eyes gleamed, giving him the impression of laughter. “Yes, I am talking to you.”

“I’ll have hot chocolate,” he said, adhering to the unwritten script.

With a flip of her wrist, she brushed the hair off her face. Her skirt flounced as she whirled away from the table, and Bob noticed that she had nicely muscled thighs. Good calves, too. Not wanting her to catch him staring, he picked up a newspaper someone had left behind and leafed through it.

The waitress returned with his beverage. “What would you do if you were a girl who just found out her boyfriend is embezzling from himself?”

Bob stirred his hot chocolate, trying to think of the right response, but nothing came to mind.

“Men!” she said, hurrying off to answer the ringing telephone.

Later, after the drunks had stumbled out into the night, she came back to Bob’s table carrying a cup of coffee for her and another cup of hot chocolate for him.

He raised his palms. “I didn’t order this.”

She sat across from him. “Let’s not quibble over details.” She sipped her coffee, eyes laughing at him over the rim of the cup, then she set the empty cup aside.

Folding her arms on the table, she leaned forward and stared into his face. “What do you have to say for yourself? And who are you? You’ve been coming in here every night, real late, and you never talk except to order hot chocolate.”

She leaned back. “I bet you can’t sleep. That’s why you come, isn’t it? What’s the problem? Bad dreams?”

Bob felt a shudder go through him. He came here to get away from the nightmares, not remember them. He took a gulp of chocolate, grateful for the warmth sliding down his throat.

“You’re a shy one,” she said. “And you never did answer my question.”

He lifted one shoulder in a disinterested shrug. “You asked a lot of questions.”

“The one about the girl finding out that her boyfriend is embezzling from himself.”

“Depends on their relationship. Is she involved in the business?”

“She helped him start it, works in the office during the day, and waits tables at night to pay the rent.”

“Then he’s embezzling from her, too.”

She flicked the hair out of her eyes. “You’re right. God, what a fool I’ve been. Ever since I found out he’s been cheating on his business, I’ve been wondering if he’s been cheating on me. That son of a rabid dog. He promised we’d get a house together as soon as the business did well enough, and it turns out we could have been living in our own place for several months now.”

“Even if he’s not cheating on you physically,” Bob said, “he’s cheated on you morally.”

“I want someone who’s honest and true to himself, someone who likes and respects himself so he can like and respect me. Is that too much to ask?”

The door opened. A young couple entered. Mouths locked together, they slid into a booth and groped beneath each other’s clothes.

The waitress stood. “I better go remind them this isn’t a motel.”

Grateful to be alone, Bob sipped his hot chocolate and read the newspaper.

The Broncos still reeled from their humiliation at the previous Super Bowl, having lost to the Redskins forty-two to ten.

Two youths found a man’s decomposing body in a culvert off the South Platte River. The man had been tortured; the work of a gang, the police surmised.

“I brought you another hot chocolate. It’s on the house.” The young woman sat and peered at Bob. “Is something wrong? You don’t look so good all of a sudden.”

He tried to ignore the ache inching up the back of his head. “What would you do if you were reading today’s paper and came across the obituary of your mother who’s been buried for twenty-two years?”

She laughed. “Go to the funeral, of course.” She must have realized Bob hadn’t meant to be funny, because the mirth faded from her eyes. “You’re serious?”

“Dead serious.” He showed her the notice.

She read it aloud. ” ‘Lydia Loretta Stark, sixty-six, of Denver, passed away August twenty-ninth, nineteen eighty-eight, at four p.m. Preceded in death by husband Edward Jackson. Survived by sons Edward Jackson, Junior and Robert; six grandchildren. Services and interment Friday, ten a.m., at Mountain View Cemetery.’ ” She looked at him. “Are you Edward or Robert?”

“Robert. My brother is Edward, but he goes by the name of Jackson.”

“I’m Kerry. Kerry Casillas.” She eyed the obituary. “How many of those children are yours?

Bob massaged the back of his neck. “None.”

“Jackson’s been a busy boy.”

“I haven’t seen him since my mother’s funeral-the first one, I mean. We never got along.”

She pushed back her hair. “So this is really your mother’s obituary?”

“Could be. She died in nineteen sixty-six at the age of forty-four and had no grandchildren at the time, but everything else matches.”

“If it’s not a coincidence, it must be a hoax.”

Bob shook his head, stopping abruptly when pain shot to the top of his skull. “Why would anyone go through all the trouble of putting a fake obituary in the paper? And who’s being hoaxed? It can’t be me. No one knows I’m in Denver.”

On Friday, Bob made the trip to Mountain View Cemetery. He wandered around the lush expanse, skirting formal flower gardens and stepping over white gravestones lying flush with the ground. The place seemed deserted, but as he topped a small rise, he saw a funeral party spread out before him like a stage play.

He paused beside a large clump of lilac bushes and scanned the small crowd encircling the brass-trimmed casket.

Everyone wore black except one young woman, scarcely out of her teens, who had pasted on a skimpy red dress that left no part of her voluptuous figure to the imagination. A much older man had an arm draped around her, his hand cupping her buttocks.

Bob recognized the man: his brother. Jackson had been a good-looking boy, having inherited his father’s athletic build and his mother’s blond beauty. He still looked good, though Bob could see that too many years of hard living or hard drinking had left their mark.

Bob’s headache returned in full force. He closed his eyes and massaged his temples while breathing deeply. When the pain abated, he glanced at the crowd again and noticed two men with the tensed posture of police officers on duty standing off to one side. They seemed familiar, but he couldn’t place them. As if becoming aware of his scrutiny, they turned in his direction.

He stepped closer to the lilac bush, out of their line of vision.

Clustered with their backs to him stood a man, a woman, and six children ranging in age from about two years old to about sixteen. The obituary had mentioned six grandchildren, Bob recalled. Were these six his brother’s offspring, by an ex-wife, perhaps?

One of the children, a pudgy little boy, reached out and yanked the pigtails of the taller, skinnier girl slouching next to him. She slapped him. The next moment they were rolling around on the ground and pummeling each other.

The woman turned around. “Stop it, you two.”

Bob sucked in his breath. Lorena Jones, his college girlfriend? What was she doing here? How did she know these people? He certainly hadn’t introduced her to them.

Feeling dizzy, he studied her while she scolded the children. Deep lines and red splotches marred her once satiny smooth face, and her body appeared bloated, as if she had not bothered to lose the extra weight from her last pregnancy or two. Despite those changes, she looked remarkably like her college picture he still carried in his wallet along with the Dear John letter that had ended their relationship.

Lorena nudged the man next to her. “Robert Stark, don’t just stand there. Do something.”

The man she called Robert Stark turned around to admonish the children.

Bob stared. The other Robert Stark seemed to have aged a bit faster than he, seemed more used, but the resemblance could not be denied. He was looking at himself.

Head aching so much he could scarcely breathe, he stood like stone. Not even his eyes moved as he watched the rest of the ceremony.

When everyone left, he approached the casket. He gazed at it, then turned to walk away. A flash of white caught his attention-the headstone, lying discreetly off to the side, ready to be inset: Lydia Loretta Stark, cherished wife, beloved mother; adored grandmother; born March 10, 1922; died August 29, 1988.

“What the hell is going on?” he asked aloud.

The mild expletive hung in the air until a sudden breeze blew it away. 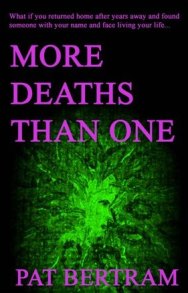 15 Responses to “More Deaths Than One”