Nothing important to say. Just a lot of little updates, so feel free to head to more interesting blogs. You won’t hurt my feelings.

I’m still reeling from my recent yellathon. I called the auto body guy who’s restoring my ancient VW Beetle, and when I found out that once again he’s stopped working on it, I yelled, “It’s been four months. You’ve had my car four months.” I don’t like yelling, but I don’t know how to get through to this guy. Tears didn’t do it. Patience didn’t do it. Telling my sad story didn’t do it. (No car, no family to speak of, no  place to live, no way to get to someplace.) I could threaten him, but with what? That I won’t pay him? Then he won’t do the work. That I could get someone else to do the work? He knows as well as I do that no one will do it as well or as cheaply, and besides, taking it to anyone else would start the clock ticking again, and I’d have another three or four months to wait.

So, every time he said anything, offered any excuse, such as that I wouldn’t want him to do a Mickey Mouse job or that he was beezybeezybeezy or that there was a lot of work left to do on my car, I yelled, “It’s been four months! You’ve had my car four months!” 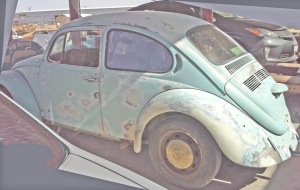 d I get through to him? I doubt it. I guess I should count myself lucky. A friend just told me about a car place who had a friend’s car for nine months, and when she went to check on it the other day, it wasn’t there. Yikes. At least this auto body guy still has my car, even if it is sitting under the desert sun and my new tires are rotting to say nothing of what’s happening to the recently replaced mechanical parts.

So, back to waiting. I had planned to take a trip by bus or train until the car is done, but if I’m not here to go check on the car occasionally and to keep reminding him, “It’s been four months! You’ve had my car four months,” it could be years before he finally gets it done. (And I sure as heck don’t want to be wandering around on either the bus or train for that long!) I’m trying not to regret the decision to have the car restored, and mostly I’m okay with it, but sometimes I do wonder. Still, in all the months of looking for a new car, I didn’t find one that spoke to me, so here I am in this no-man’s land (no woman’s land? no nomad’s land?), just waiting. Well, not just waiting. I am gearing up for adventure.

Several people have expressed worry that I’m spending a small fortune on backpacking equipment that I might never need (the way it looks at the moment — bleak — who knows if I will ever get on the road). But the truth is, even if it turns out I hate camping and/or backpacking, it doesn’t hurt to have a camping quilt, sleeping pad, tent, water filter, and solar charger packed away in the car for emergencies. (Because this is lightweight packing gear, it takes up almost no room.) And a good pack is always a great thing to have. An elderly man recently died in the desert when he took a short cut on a back road and damaged his car. If he had such equipment with him, he might have been able to survive, so no matter what happens — adventure, accident, Armageddon, Apocalypse — these items aren’t a wasteful purchase. Besides, all of these things together don’t add up to a single month’s rent and utilities.

I so seldom buy anything but necessities, it’s been fun playing with my new toys. The pack has a lot of lovely pockets and pouches, and plenty of straps and buckles to ensure a perfect fit. The solar charger works great to recharge my phone, and though it didn’t seem to add any charge the external lithium battery unit that came with the charger, there is always the possibility of recharging the external battery by plugging into a wall socket when available. (The fully charged battery will charge my phone about four times, so I will no longer have to worry about running out of battery power on my phone at inopportune moments.)

This weekend I will take the time to figure out the tent. Meantime, I’ve been watching videos on how to set it up. Takes about four minutes once you know what you’re doing. Oddly, they don’t explain how to use the guy lines. I guess they think this is an experienced person’s tent. Also, the “gear loft,” a series of mesh pockets for small necessities did not come with the tent (though for the price, it should have) and I didn’t buy one. Other than that, it really looks well thought out. Should be fun.

At the Car Hospital

I went to visit my car at the auto body shop today, and it’s left me feeling . . . I don’t know. Shaken, maybe. I never wanted to see it in the intermediate stages of restoration — things so often get worse before they get better, and this is so much worse! — but I needed to see if the car was in fact being worked on. 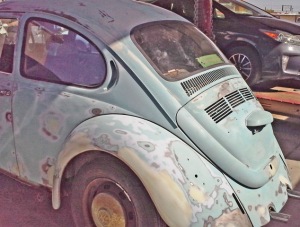 And oh, the poor thing! Makes me wonder if I will regret having all the work done. I am pouring out a lot of money for what is, after all, an ancient vehicle. (I have never done an expensive foolhardy thing in my life, never wasted more than a few dollars at a time, so if this turns out to be a foolish move, then, I’ll just chalk it up to experience.) Even worse, I’m stuck in this vehicleless and homeless state for another month, and the frustration of it all is getting to me. I am an independent soul who hates begging for help, and lately, I am in that situation more often than not, especially since I am running out of people to sponge off of. In the beginning, people felt good about helping, and were pleased to have an opportunity to be kind, but three months is enough to strain everyone’s patience.

One friend said that the reason homeless people end up on the street is that they run out of people to stay with, and I am heading in that direction, at least locally. I’m not in any danger of ending up on the street — I’m not destitute and there are such things as motels, after all, but without a car, I would be trapped.

I suppose it’s good for me to be temporarily embracing such a lifestyle as this, humbling though it might be. Since I have chosen to believe I am where I am meant to be, there could be a reason I am supposed to be hanging around. Or not. It could simply be an ill-fated wind blowing through my life.

Oddly, despite the lengthy restoration process (and the even lengthier wait for the restorer to get started), I still trust this guy. I think he’s an artist who knows what he is doing. And one cannot hurry art. So will this mess end up as a workable piece of art? Only the auto body guy knows. 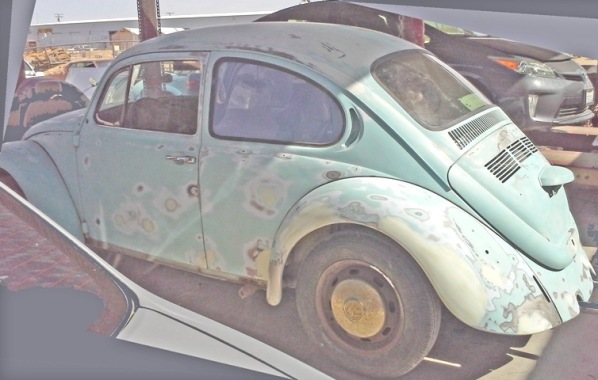