Getting Back Into Dancing

Now that much of the chaos of the past year is gone — buying a house, moving, settling in to a new town, meeting people, fixing things that need to be fixed — I’m gradually getting back into exercise. There is still much to do around the house, such as having a garage build and a bit of landscaping done, but on the days when no one is here working, there is certainly no reason for me not to exercise. Except laziness, of course, but that’s not a reason, just an excuse.

Nor is having all the stuff that was once in my garage piled into the back room (aka enclosed porch, aka exercise room) a reason. It finally dawned on me if I removed the folding table and chairs from my dining area, I have a perfectly acceptable workout space. Even better, it’s warmer than the back room.

So, having run out of excuses, I’ve had no other option than to exercise.

It’s appalling how quickly one loses flexibility when one has not been exercising or even stretching. (“One” meaning me, of course.) Yikes. I can still get down on the floor, so it won’t be long before I get some flexibility back. Meantime, I’ve been having fun practicing belly dance steps. 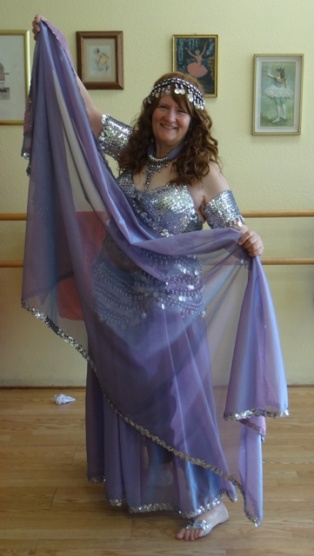 From the first time I took a belly dance class, I thought it would be a perfect way for me to get in shape because it seems more intuitive — more natural — than other dances. (Ballet, for example, is known for going against nature, and it certainly went against my nature, though I did work to the best of my ability.) Although I loved the belly dance class, I became disenchanted because so much of the class time was taken up with performance talk and costume planning. What was left of the hour went to learning and practicing a routine, so there was not much time dedicated to basics.

Since I can now schedule my own “class,” I am focusing on basics. I’m curious to see if a concerted effort at this sort of exercise will have the benefits I hope for, but if not, well . . . dancing. Dancing in itself is a benefit. Every step I take, every move I make is a blessing, and I am grateful to still be ambulatory, still breathing on my own, still fairly active. (I was going to say “spry,” but I’m not old enough yet to be spry.)

I do miss the energy of choreographed dancing with a group — it always seemed I could do more than when I was by myself, but I don’t miss performing. 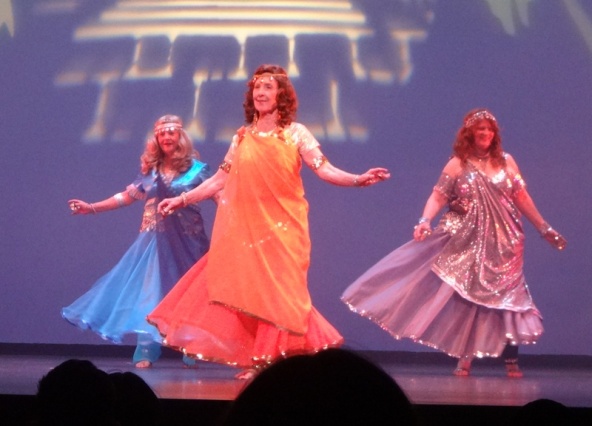 I did my first belly dance performance with the group only a few months after I starting taking classes, and though I was no slimmer then than I am now, I was okay with it — I had a fabulous costume, a flattering wig, and a great attitude: “This is who I am. Deal with it.” As time went on, I lost that attitude, and so performing became more of a chore and less of a joy, though I did retain the love of dancing for dancing’s sake.

Of all dance forms, belly dance seems to lend itself to solo dancing, to pulling energy from the soul rather than the spirit of a group, to being one with one’s body. It helps that I’m not dancing in front of a mirror — I can feel young and beautiful and graceful without the unpalatable truth glaring at me.

Once the garage is built and my back room available to me once more, I will be able to do some barre work, maybe some tap or jazz, and perhaps even Hawaiian. Until then, there’s me, a veil, an open floor, and belly dance.

A Trip of Treats 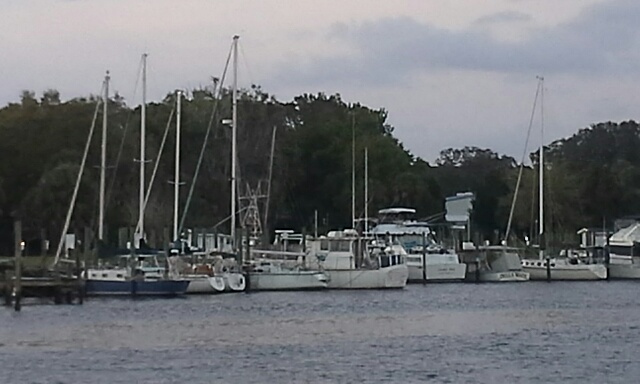 This has been a journey of many treats. I had hoped the trip would include much hiking, but I seem to be in a sedentary mode with all the driving and the visits with friends. In an effort to break that pattern, I took a side road that was supposed to intersect with the Florida National Trail, but I never found it. (I have a hunch that parts of FNT, like parts of the California Coastal Trail, exist as an as yet unrealized hope.)

When I realized I had passed the trail, which followed a shortcut back to the freeway, I considered going back but decided to keep moving on down the road, and I am glad I did. Such a treat! It was a beautiful drive among trees, past spectacular beaches, and through beach towns. Driving across the water on intercoastal highways was a special thrill.

The most memorable part of that leg of the journey was Bonita Bay, a recreational area run by the Air Force. It seemed strange to me that a war engine would be involved in something so trivial, but it wasn’t as surprising as it would have been before I learned that the Army Corps of Engineers runs campgrounds all over the country.

Even more memorable, at the end of the road, I met in person a fellow author, Coco Ihle, author of She Had to Know. I enjoyed hearing the story behind her book, which is based on her own search for her long-lost-now found sister, and I have been privileged to see her in her own milieu.

Coco is amazing! Everything she touches turns to beauty. Whichever way you turn in her house is another fabulous piece of art, collected from her world travels, bought at a bargain from Big Lots, or created by her. To my delight, she keeps her Christmas tree — perhaps the most beautiful tree I have ever seen — set up most of the year.

She kindly let me take pictures, to post here, and even let me post the fabulous photo of herself when she was a belly dancer. (Coco is the woman who encouraged me to look into belly dancing for myself.)

Besides all that, we have been playing tourist. We had dinner at a restaurant in a Greek town on the sponge docks. (A one time, sponge was a bigger industry in Florida than even oranges or tourism.) We ate on the docks, with the Anclote River flowing by and a sandhill crane keeping us company.

Now we are off to see the Florida Aquarium, another incredible treat in a trip that has been nothing but treats.

See you when we get back! 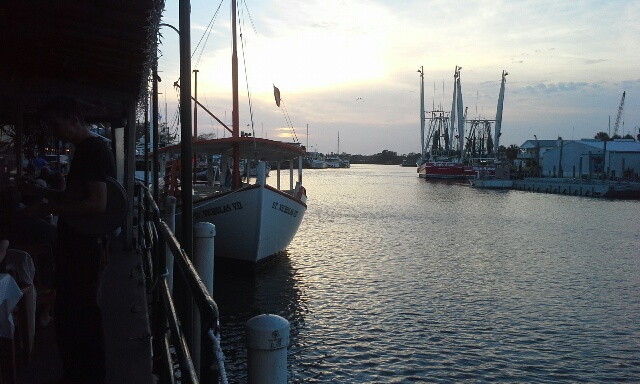 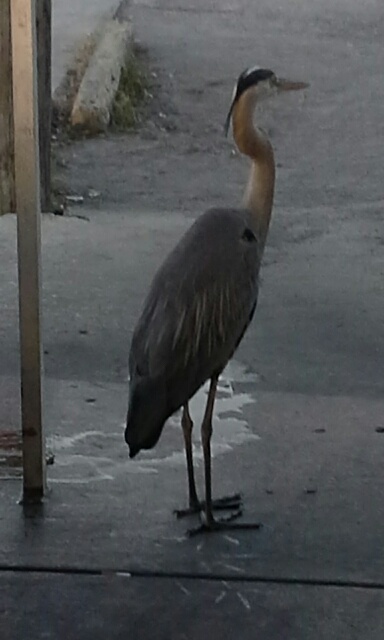 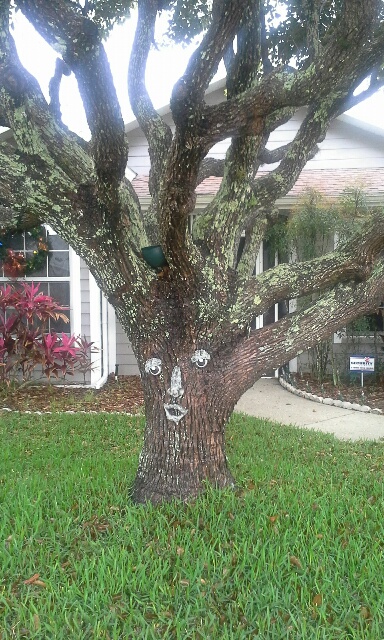 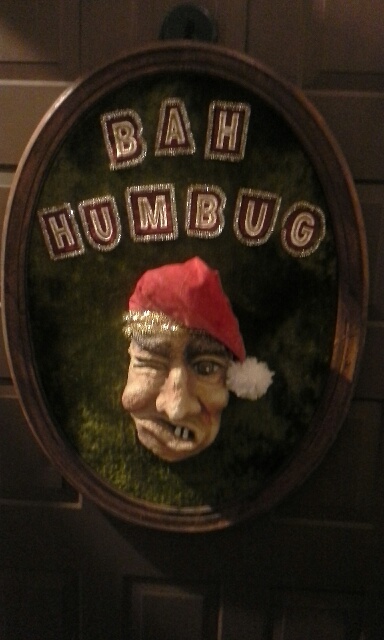 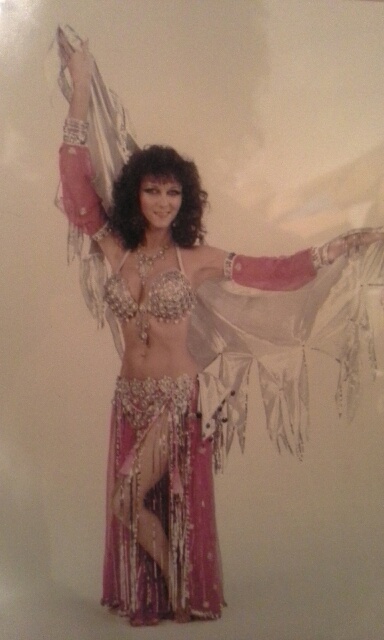 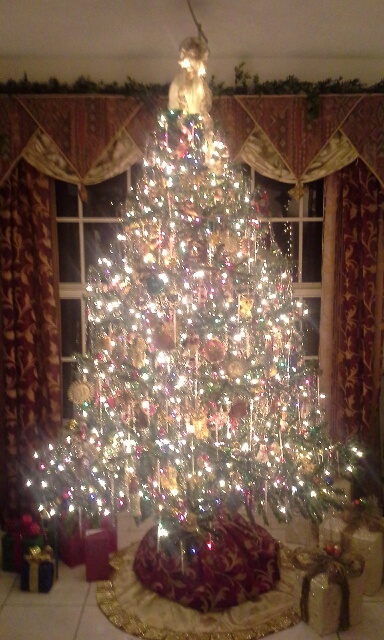 Easy Does It, and Other Notable Blog Posts From Second Wind Publishing

The Second Wind Publishing blog always seems to have interesting posts. For example, Harry Margulies, author of The Knowledge Holder, wrote Easy Does It, a wonderful blog about character names that really hit home. One of the many reasons I can’t read fantasy is the fantastic names the authors come up with. Harry’s plea for simple names is humorous and fits my philosophy. My characters are named Bob and Mary and Kate and Phillip. Nice simple names for not so simple characters.

Jay Duret, author of the soon-to-be published novel Nine Digits, wrote Nom de Plume, a funny look at how his pseudonym evolved as his he evolved. For me, it was the other way. I chose as a nom de plume a variation of my name that I wasn’t using at the time simply because it sounded authorly, and somehow I have evolved into that name. Now it’s the one I use both online and in the real world.

Harry Margulies’s most recent post is The Enchanted Food Network, a humorous look at cooking, food networks, and the fantasy of never having to use a Brillo pad.

A year ago, Coco Ihle, author of She Had to Know, wrote Belly Dancing…Dangerous?, which planted the seeds of dancing in my head. I didn’t actually start taking lessons until six months later when I happened upon a nearby studio, but if it weren’t for those seeds, I might not have gone inside and talked to the studio owner. And it changed my life.

Other articles to check out on the Second Wind Publishing blog: A Love Letter to My Magnolia, by Carole Howard, If You Got Transcended Would You Know It? by Lazarus Barnhill, and What is Your Character’s Favorite Color? — by Pat Bertram 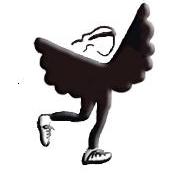