It rained enough last night to drench the ground, so I was able to miss a day of watering my lawn, bushes, and other plants. Unfortunately, the rain must have been enhanced with weed growth hormones, because the weeds took over. I suppose I should have used the opportunity of a free day (no work today as well as no watering) to pull some of the weeds, but I didn’t want to deal with the mud. This is clay soil; I’m certain you wouldn’t want to deal with the thick, slippery goo either.

Instead, I did an inside chore or two, then hunkered down to assemble some kitchen chairs. A relative wanted to get rid of the chairs, and he sent them to me. I’d planned to put the reassembled chairs in the basement in case I ever have to spend time down there, such as in a tornado emergency, but I had visions of myself falling while trying to descend with those light but awkward chairs, and falling is so not on my to-do list. So I stowed the chairs in my garage until someone younger and more agile shows up, someone I can cajole into doing the deed for me. Actually, the cajoling part is easy — any of the workers who have been here would be more than willing to take the chairs to the basement. It’s getting them here that’s hard. Eventually, though, they’ll stop by to do a bit more work. Meantime, the chairs are doing no harm in the garage. Besides, they’re close at hand if I decide to sit outside.

After I assembled the chairs, I worked on my Three Years in Bloom project. Although I was only recently given the journal, the journal itself starts in January. It seemed as if I had two choices — wait until next January to start or start the journal now and then circle back to next January. Then a third option struck me — I could fill in those first months using bits from my blog. So I did. It was harder than I thought it would be, mostly because there was so little to work with. Apparently, I don’t do any gardening in January when there is snow on the ground. (I’m being facetious here since not many people garden in the snow.) Nor had I done much planning or dreaming about what to plant come spring. I’d purposely not looked at the seed and plant catalogs that piled up — I wanted to wait to see what takes hold this spring before I go looking for other plants. So until mid-March when I planted my greengage plum trees and a couple of crocus bloomed, the only thing I’ve written about that has any possible connection to gardening is the weather. During those winter months, I was able to take a break from watering my grass, so there wasn’t even that to talk about.

Still, I managed to bring myself current on the journal.

Speaking of gardening — I noticed that the rain not only brought out the weeds, it also budded the larkspur. I should be seeing some purple flowers very soon. I also noticed a few alliums. I’d forgotten that before we put the rocks around the house, I’d dug up the allium bulbs that would have been buried, and transplanted them. This forgetfulness seems to indicate the importance of keeping a gardening journal. On the other hand, if the bulbs hadn’t come up this year, it wouldn’t have mattered that I forgot them.

It does amuse me that I am turning into a gardener since I’ve always had a brown thumb. It must be the right time in my life for such a new pursuit. A garden is never truly finished and perfected, but is an ongoing work in progress. So too, it seems, is a gardener.

I started this post talking about weeds, and I will finish the same way. We’re not expecting any more rain for a while (in fact, we’re back to fire weather watch), so tomorrow the ground should be dry enough on the surface to make it a good time to pull weeds. I just hope I don’t pull non-weeds in the process. But if I did, would I even know?

Pat Bertram is the author of intriguing fiction and insightful works of grief.

I’d just fixed lunch when the mail carrier came with the vinca minor bare root plants that I ordered. Since I knew I wouldn’t want to work once I got home from work, I set my lunch aside and went out to plant. I’d already made a planter out of a tree stump, so all I had to do was stick the plants in the soil. It was easy enough to do. Now I just have to wait to see if the plants will take hold. If so, I’ll have an interesting mound of vegetation. If not, I’ll have the stump removed with the rest of the stumps on the property when the time comes. In this case, I can’t really lose anything except the small amount of cash for the plants. 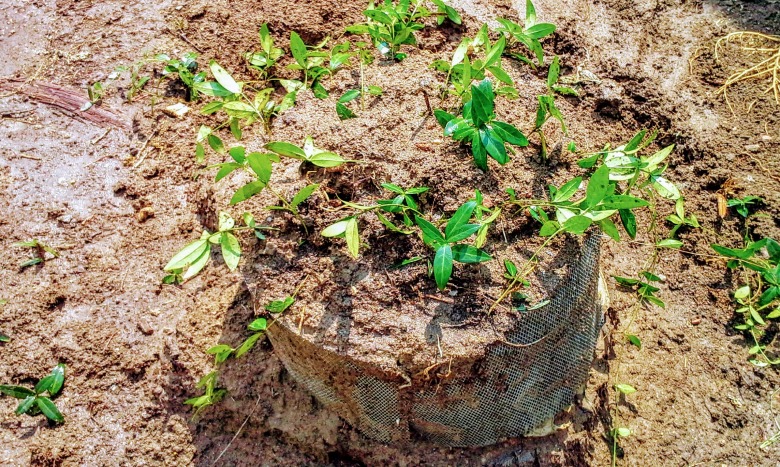 I was thrilled with my helper. He wasn’t very good at digging or carrying tools, but he kept watch so I could work undisturbed. 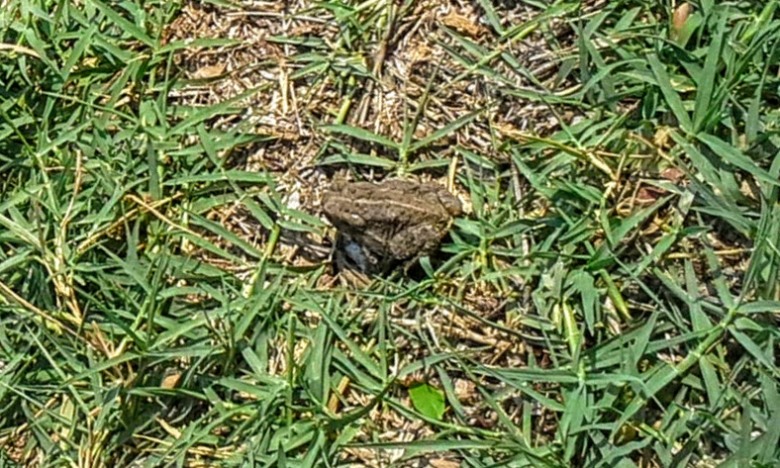 Tomorrow, with any luck, my human helpers will be back. They’re going to start tearing out the old sidewalk, ramp, and stoop, and putting in a new one. I’m mostly looking forward to the stoop being finished. The step down from the house is just too steep for me anymore, so I’ve been using the front door, which I don’t really like. One, I don’t want to advertise my comings and goings, and two, I’m not fond of tracking dirt into the house. Even removing my shoes as soon as I get in the door doesn’t help completely. Sometimes I forget something and have to come back in to retrieve it and am too lazy to take off my shoes. And sometimes the dirt gets carried around on my socks no matter what I do.

The dirt here isn’t powdery, but instead is clumpish because of the clay soil, and I so do not like stepping on those clumps with shoeless feet! Soon, though, I’ll be able to use my back door and the mud area I created in my sun room for putting on and taking off shoes. Also, when the pathways are in — to the back gate, around what will be flower beds, and along the sides of the yard to the front gate — I should be able to avoid a lot of mud. Of course, one foolproof way of avoiding mud is never to go outside, but I haven’t been putting all this effort into my yard just to sit inside and look out windows. I suppose there could come such a time, but not now, and hopefully not soon.

Can you tell I really have nothing to say? I used to get annoyed at people who would write of the minutiae of their lives, but here I am. No great wisdom to impart, no great traumas to dissect, no cosmic revelations. Just me and my small doings in my small house in my small town.