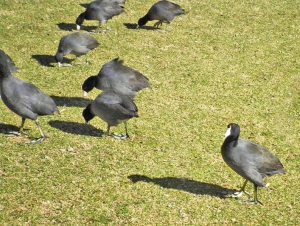 Several months ago when I was steeped in grief, I found comfort in the thought that my deceased life mate — my soul mate — was at peace, but then it occurred to me that maybe he wasn’t, that if there was some sort of life after death perhaps he felt as split apart as I did. According to one minister I talked to, my mate could be having problems depending on how codependent he was. Whatever that means. I thought a relationship was about being dependent on each other, and we were. At least until our last year together when we began untwinning our lives so we could go our separate ways — he to death, me to continued life. That’s also why my grief shocked me so much—I thought we had untwinned even before he died.

I can see that people would have questions about codependency considering how bereft I was without him and how lost I felt, but when he was alive, we were never obsessed with each other, though we were connected in so many ways. We were friends, life mates, and business partners. We always wanted what was best for the other. We helped each other grow. We never expected the other to fix our individual problems, though we often took each other’s advice. We didn’t cling, demand, or base our relationship on unrealistic expectations. Together we provided a safe environment where each of us could be ourselves. And we supported each other any way we could. Yes, we were dependent on each other, but isn’t that what life is all about?

Long-term illness, however, does skew a relationship. Over the years, our world kept getting smaller and smaller, trapping us in a terrible situation where neither his nor my needs were being met. To that extent, perhaps, we were codependent, staying together when others might not have, but what is wrong with that? Still, I’ve felt foolish at times admitting my need for him. In this world that prizes independence so much, it seemed immature and self-indulgent.

But, as one commenter on my Grief is NOT Self-Indulgent post said, “There is nothing foolish in dependence. The foolishness lies in the notion that we are not co-dependant on each other. We are a co-dependant vulnerable species who waste a whole lot of time and cause ourselves much suffering by pretending we are not. There are many reasons why we perpetuate this denial but just as we are dependant on the earth for our physical health so are we dependant on each other for our emotional health.

“Personally I feel there is a strong connection between people not understanding grief and those same people not understanding just how precious and vital their relationships are. Every day I see people not recognizing the value of each other. It often amazes me how much we deny our dependence on each other . . .  we don’t even like the word dependant. Perhaps that is why grief is so hard to witness for then our dependence is there in the open smacking us in the face.” (She developed this idea into a blog post The Illusion of Independence at Leesis Ponders.)

Well, I no longer have to worry about whether we were codependent or interdependent. I am independent now. His death freed me, but for what? I still have to figure that out.