My Problem With Men

Lately I’ve been noticing a strange thing about men. If I get upset by something they say, even if they are simply imparting information and not saying anything to purposely hurt me, they respond, “I shouldn’t have told you.”

Huh? Just because I don’t like the news doesn’t mean they shouldn’t have told me. Just because I get upset is no reason to keep me in the dark. Are men so fragile they can’t handle anger, tears, heartbreak, even if it’s not directed at them? Or even if it is directed at them? (To tell the truth, I’m not sure I could handle anger or tears if they were directed at me, but if I did something to provoke those reactions, I sure would do something to try smooth things over.)

I seem to have lost the ability to deal with men, assuming I e

ver had the ability to begin with. I’ve lost a friend who was dear to me because he couldn’t handle my emotional reactions. He didn’t seem to think I had the right to be angry or feel hurt by anything he did, or maybe it was just that he didn’t like my show of emotion. For a while, I thought my problems with him were more of a personal nature, but now I see that the problems stemmed from a basic conflict — he is a man and I am a woman. We might not be from Venus or Mars or whatever planets we are supposed to be from, but there is a distinct difference in the way we see things.

Today, another man told me that my neighbors were hurt by my not telling them about my father’s funeral, though I had done so. They had been shunning me, turning around and walking the other way when they saw me or when I spoke to them, and even though I was upset by what he said, I needed to know because his words explained their actions. When I made the comment that it was my father who died, I got tearful as I always do now at the reminder of death. He immediately said, “I shouldn’t have told you.”

So what if I was upset? So what if I cried a bit? So what if I was momentarily angry at the unfairness of it? It’s not like I’m going to spend the rest of my life agonizing over the neighbor’s snubbery. (My word processor doesn’t like my making up words. It keeps changing snubbery to snobbery.) Luckily, my emotional reaction passed as quickly as it came, and luckily he was reasonable so we were able to get beyond our differences.

My real problem with men and emotions comes when I interject my emotions into the middle of a story or explanation. I don’t know whether it’s the interruption that upsets men or that the interruption is emotional. (I never notice this with women.) I don’t deny that my emotions are close to the surface now, and they pop up when and where they will without waiting for the end of a tale. I suppose I should try to cap my emotional responses, but I’m not sure I want to. It’s easier to get beyond life’s sad/bad parts if I can emote a minute (or a lot of minutes) and then let go.

There is a lesson in all this, though I’m not sure what.

Being in Two Places at Once 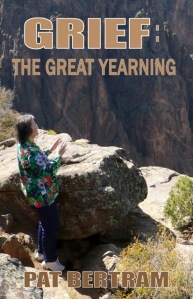 The other day, a friend came early to her dance class and sat reading Grief: The Great Yearning while I danced with my class. I thought I would feel uncomfortable seeing such a new friend read the truth of me, but that didn’t affect me, perhaps because I am used to throwing my emotions out there for anyone to catch and make of them what they wish. Still, it did feel odd, as if I were in two places at once — both in the book where I was so abandoned to grief I could only scream my pain to the wind and in the studio where I was so abandoned to dancing I could only smile.

The emotion in Grief: The Great Yearning is so raw, it is as if I myself reside between the pages of the book, and in fact, the friend also remarked on the strangeness of living my story and feeling my grief and then looking up to see me dancing.

For a long time, I thought I would always be that woman lost in grief, but grief itself changed me. From the first moment grief stole my breath from me, I knew it was important to follow where it led, that it would take me where I needed to be, that it would help me become the woman who could survive the loss of her soul mate.

And so it came to be.

Other people read of my grief now, and the description of my journey helps them to follow their own path of grief, which is one great benefit of having written so passionately about my feelings, but another great benefit is that I don’t have to waste time remembering my grief, don’t have to wallow in it. It exists outside of me now. If I ever want to relive those days, I can simply pick up the book, and there I will be.

As strange as it might seem, years from now I probably will want to read the book. I am losing the memory of him and our shared life, losing the feeling of ever having been profoundly connected to another human being, and I might need to remember that once I loved, once I was so connected to another human being that his death shattered me. Even more than that, I still have a void inside of me where he once was, and someday I might need to remember why it is there.

(PS: If you know of anyone who is experiencing profound grief, please consider gifting them with a copy of Grief: The Great Yearning. It might help them to know that others have been where they are, and survived.)

Pat Bertram is the author of the suspense novels Light Bringer, More Deaths Than One, A Spark of Heavenly Fire, andDaughter Am I. Bertram is also the author of Grief: The Great Yearning, “an exquisite book, wrenching to read, and at the same time full of profound truths.” Connect with Pat on Google+. Like Pat on Facebook. 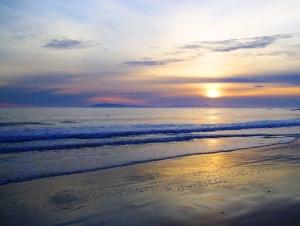 When I mentioned to a new acquaintance that I often walk two hours a day, she gave a snide little laugh and said, “You have no life.”

Getting a life seems to be a common concern in recent years, but what is a life? And where do you get one? Lifes R Us?

I don’t know how that odious terminology came into being or what it means. Often, especially in movies, “Getting a life,” refers to dating and looking for a mate, but since the woman who accused me of having no life had also recently lost her mate, that couldn’t be what she meant. Does having a life mean having a job? I’m in a transitional stage right now where I don’t have a job, and am not currently looking. And anyway, I’ve never found working for others to be particularly satisfying, so a job can’t be categorized as a “life.” Could “a life” refer to emotions, to feeling? Well, recently I’ve had enough emotions to fill an oil tanker, so that can’t be what she meant, either. Could “having a life” mean having fun? But that takes us into a whole other discussion: what is fun? Most of what people do for fun seems torturous to me, so I’ll stick to walking.

I’m only being a bit facetious here. The truth is, if you are alive, you have a life. It might not be satisfying — it might even be painful — but it is a life. Life is experiences, both good and bad. Life is waking and sleeping. Life is being with friends and being alone. Life is reading and writing. Life is eating and dieting. Life is success and failure. Life is tears and laughter. Life is everything we are and everything we wish to be. Life is.

Posted in life. Tags: being alive, emotions, getting a life, happiness, life is, living. 8 Comments »

The Long and Winding Road of Grief

The problem with grief (not counting the primary problem of having lost a loved one) is that so many emotions attack you all at once that you feel you can never get a grip. And then, for no fathomable reason, you hit an emotional trough where you feel nothing, and you begin to think that you can handle your grief, and then pow! Out of nowhere, it returns and slams you in the gut.

I was never a wildly emotional person, but now I am buffeted by more different emotions in a single day than I used to experience in a month. The emotions are not all negative, either. This morning, I woke up feeling a tingle of excitement — I’d planned to go on a long ramble, camera in hand, and for the first time in months, perhaps years, I felt alive. I’ve always taken long walks, but for the past couple of decades I’ve lived on a .3 mile lane between a dead end and a busy highway, so I used to walk up and down the lane, always looking for anything different to make the trek interesting. Now, I don’t have to look for those differences — I have a brand new world beneath my feet, before my eyes, and something in me is responding.

with my new awakening, is the sorrow that my mate is no longer with me. About fifteen minutes before I returned from my walk today, the thought that he was not waiting for me at the end doubled me over with pain. After such a bout, when the immediacy of the pain passes, when the tears finally dissipate, I’m left with the inexplicable feeling that he is away, perhaps getting well, and one of these days he will be calling, telling me I can come home. But he won’t be calling. And I won’t be going home.

And so I continue walking the long and winding road of grief.