Life Goes On Even if the Whole Thing is Flawed 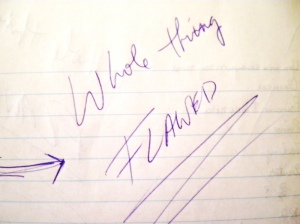 Today marks the nineteenth month since my life mate — my soul mate — died of inoperable kidney cancer. 580 days of missing him have passed, and there is still a lifetime of such days ahead of me.

It was a quiet day for me today, no big emotional storm — the storm came last month. I can see why there would be a grief upsurge at twelve months — that is a major anniversary and a big step. But at eighteen months? Can’t figure that one out. But, as I have learned, grief has no logic. It comes and goes as it pleases. Most times I do well by keeping busy and focusing on the moment, other times I am overwhelmed . . . again . . . by the realization that he is dead.

I hate that he is gone. The world is so much poorer without him. If he had left me for another person or place on earth, I would probably be furious at him for leaving, but I would not have this feeling of blank. It’s as if something in the middle of the page of my life was erased, and that blank spot remains. I work around the blank spot, fill it with excursions, friends, exercise, online activities, but still, it is there, a major flaw in my life.

He and I used to make tapes of the songs we liked, along with an index of each tape so we’d know what we have. I started going through some of his music tapes, trying to decide what I want to do with them. (I’d like to keep everything I have left of his, but when one leads an unsettled life, extraneous possessions become a burden rather than a luxury.) I was doing fine until I came across a tape marked flawed. I pulled out the paper that listed the songs on that particular tape. He had written in big letters across the top of the page: whole thing flawed. I set both the tape and the index on my work table, and that was the end of that. I haven’t been able to go through any more of his music, nor have I been able to throw away that tape or that paper. So every day I see that message: Whole thing flawed. That’s what life feels like now — it’s continuing on, but with him gone, the whole thing seems flawed.

I still have his tape player, and in the player is one of his tapes. If I rewind the tape a bit, I’ll be able to listen to the last song he ever heard. That’s something else I haven’t been able to do, or wanted to do. I don’t know how I’ll feel. Don’t know if it will make me feel connected to him, if it will set off a storm of tears, or if I will feel as if I were spying on him. So the tape player with that final tape is packed away, along with all his other tapes except the one on my table with it’s stark reminder: whole thing flawed.