Something Nasty in the Wooden Shed

My next book seems to be writing itself, which, now that I think about it, is a good thing since obviously, I am not writing it. Obvious to me, anyway. When I am not actively involved in my new house and new neighborhood and new town, I loll around on my new couch and read new books from the library.

All of which might make for a nice life, but doesn’t do much for the word count.

I still don’t know what the story is, though I do have the main character (Pat from Madame ZeeZee’s Nightmare), and I have the setting (this house of course). And I have a sinister atmosphere with the spooky basement, the cistern we uncovered beneath the enclosed porch, and now the shed, and more specifically, the sewer line in the shed.

The shed is actually a garage, though because it can’t be used as a garage quite yet, we have all gotten in the habit of calling it a shed. One corner of the building leans severely enough to the right that it prevents one of the doors from opening. The contractor had thought overwatering the flowers near the foundation of the garage made the floor crack, which made that corner lean precariously. Since all the other corners of the garage are completely straight, however, he’s decided it’s unlikely the garage tilted, because if it had tilted, the opposite corner would have also had to tilt. And it didn’t. So now he thinks the garage was built like that.

Then, as we were checking out the ceiling in the shed/garage, he pointed out a ten-foot piece of turquoise pipe stashed in the rafters. 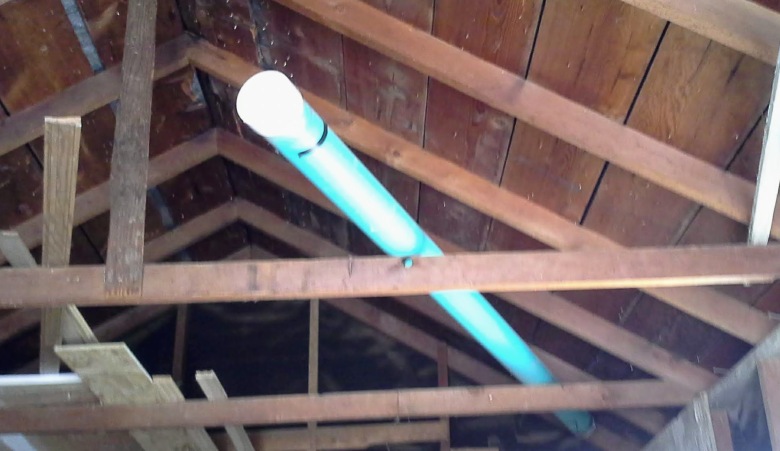 I’d never given a second thought to the pipe (never even given it a first thought!) — it was just one of the many pieces of junk that needs to be cleared out. He stared up at that piece of turquoise tubing and wondered aloud what it was doing there. And what he should do about it.

I told him he could haul it away with all the rest of the junk, but he kept staring at it. “The pipe is capped on both ends,” he said. “Anything could be stored in there.”

See? Plenty of atmosphere for my new novel.

At least, I hope that’s all it is — atmosphere — and not something nasty in the wooden shed.