When my two sisters and I were on Whidbey Island, we realized that with all the photo-taking, we not did have a single picture of the three of us together. We didn’t see anyone who seemed approachable enough to ask them to take a photo, but we decided it was okay, that maybe every time we got together for a sisters’ event, we could say that it was another time when we didn’t get a photo.

We all liked the idea, actually, until we discovered the 3 Sisters Market and 3 Sisters hooded sweatshirts. 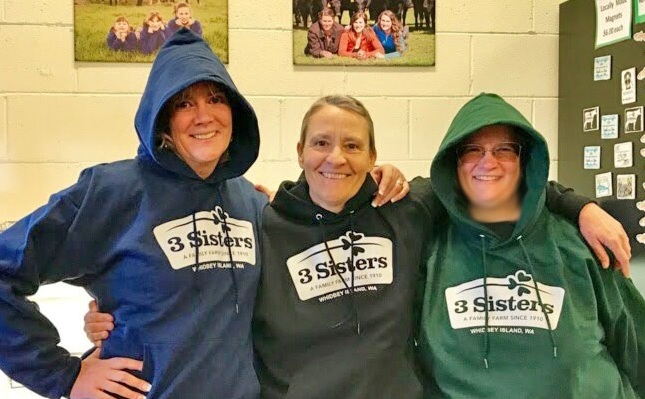 Although the “hood” connection to sisterhood didn’t come to me until after the fact (it was one of those “duh” moments that makes me wonder why it took so long to see the connection) I get such a kick out of the above photo, because — how perfect! Three sisters with hoods celebrating sisterhood. (The pictures on the wall above us are of the three sisters the market — and the farm — are named after.)

It seems weird to me how much we look like sisters in the photo. We never did, not really. We must have grown into it. Nor has there ever been any “sisterhood” among the three of us. We always paired up or if we were together, it was with others in the family. More than that, though, we never considered ourselves “three sisters,” perhaps because we were so far apart in ages and had brothers in between each of us. We are also so different from one another, as if we are sides of an equilateral triangle. (Which makes me wonder what is in the center of that triangle.)

We had such a great time (and surprisingly, got along better than any of us ever imagined) that we are planning another adventure for next year — a camping trip at The Three Sisters Wilderness Area.

How odd to think that after all these years we have discovered our sisterhood.