A friend invited me to go on a trip with her for a “secret stairs” hike in Hollywood. Even though I didn’t know what the hike was about, of course I said “yes.” I have developed the habit of saying yes to anything anyone invites me to do, even if my first inclination were to hesitate or even say no, a practice that has led me to many wonderful places and activities that I would never even thought of experiencing. Even if I weren’t already primed to accept, I’d have gone — I’ve never been able to resist anything “secret.” There are a vast number of secrets in the world, including life itself, and being gifted with an insatiable curiosity, I try to ferret out those secrets, but considering that so many secrets are . . . well, secret . . . by definition, I wouldn’t know that they even exist. And there, in a few simple words, I was being offered a chance to discover a hitherto unknown secret.

Apparently, there are many secret stairways in Los Angeles in the steep hilly neighborhoods that were built back before cars took over the city. These stairs allowed people to get down the hill to schools, markets, and trolley cars. In fact, many of the houses in these neighborhoods had no other access to the outside world than these public staircases. The stairs were largely forgotten until Charles Fleming published his book Secret Stairs: A Walking Guide to the Historic Staircases of Los Angeles.

A friend has been doing all of the walks — 42 of them — and has finished all but the last few. The walk she invited me on was a combination of #36 and #35 in Fleming’s book. (It was such a lovely day, she decided to do two of them.)

We started out with an unplanned stop by a bit of sidewalk graffiti that seemed oddly appropriate:

Our first scheduled stop was the historic Highland Towers apartments, where William Faulkner is supposed to have lived when he worked on such films as The Big Sleep and To Have and Have Not:

We passed the Hollywood Heritage Museum, and walked up Milner to the first secret staircase — the Whitley Terrace steps, an L-shaped staircase with 160 steps. 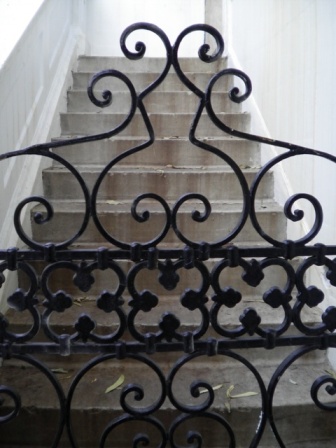 At about the ninetieth step, there was a landing with fabulous views of the High Tower residential area — not that I know what the area is, but it was an interesting sight:

I paused at the top to take a photo of the steps we had just climbed before searching out the next set of secret stairs in Hollywood. (Hint — the key to walking up huge flights of outside stairs is to stop periodically to marvel at flowers or take photos of . . . anything. That way you can catch your breath without having to admit that you have reached your limit.) 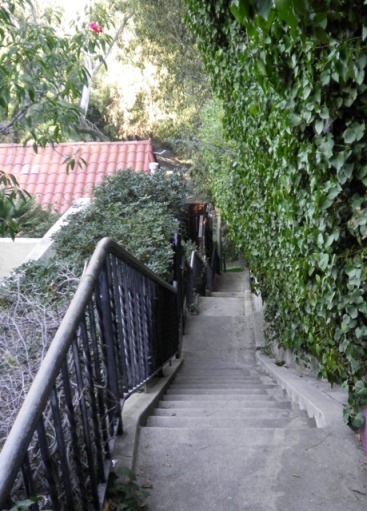 To be continued . . . (But of course, you already knew I’d be continuing this saga since the title says “Part I” and you can’t have a “Part I” without a “Part II”.)

Pat Bertram is the author of the suspense novels Light Bringer, More Deaths Than One, A Spark of Heavenly Fire, and Daughter Am I. Bertram is also the author of Grief: The Great Yearning, “an exquisite book, wrenching to read, and at the same time full of profound truths.” Follow Pat on Google+. Like Pat on Facebook.

10 Responses to “Secret Stairs (Part I)”