Haunted by the Specter of Empty Rooms

The last night in my father’s house. I’ve been wandering through the empty rooms to make sure I haven’t overlooked anything, and I can’t stop crying. It seems as if during the past five years I’ve tapped into a well of endless tears, and though the weepfests are fairly rare now, tonight brought them back.

It’s the end of so many things.

I came to this house after the death of Jeff, my life mate/soul mate, to look after my father and ensure he could be as independent as possible during his last years. I fulfilled that task, and now he is gone, too, having survived my mother by almost eight years.

I no longer know who I weep for. All my dead? The woman I once was? Death itself? 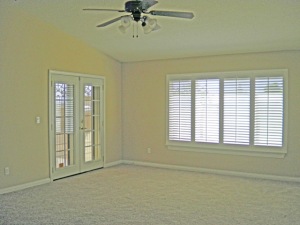 er how at the beginning of my grief, I used to marvel that so great a trauma as the death of the one person who tied me to earth and made life worth living didn’t change me. But something did — perhaps living. There is a whole world out there if I have but the courage to take it, and yet here I am, soaked in tears.

Tomorrow I will gather myself up and forge ahead with hopes and a smile, but tonight, well, tonight there are just too damn many empty rooms. Too damn much sorrow.

I know this is the cycle of life. People are born. They live a few years or many. They die. But my heart doesn’t want to know that particular truth. My heart wants what it can no longer have — to go home to Jeff. But that home is gone, too. Those rooms I emptied before I came here are filled with other people’s belongings. Jeff for sure isn’t there. Nor is he in my future.

The specter of empty rooms haunts me.

I used to love empty rooms. Jeff and I never put furniture in our living room. A weight bench. That was all. But now, empty rooms remind me of ends, not beginnings. And I am tired of ends. (That’s probably why I like the idea of a nomadic life, though I doubt I would like the reality — there are no ends, only beginnings.)

I wish I were strong and wise and brave, but the truth is I simply do what everyone does — keep on going however I can.

And tomorrow I go, leaving these empty rooms behind.

9 Responses to “Haunted by the Specter of Empty Rooms”