It seems odd to me that after all these years of talking about my desire for adventure, I no longer have reason to talk — I’m doing. My excursions might not seem all that adventurous to the truly adventurous, but for now they satisfy my inner cry for something more, and to be honest, they are all I can handle, or maybe I should say they are all my feet can handle. (Right now my feet are so sore I can barely stand, so I am taking it easy.)

Yesterday I headed out on a 7.2 mile hike, starting on what was called The Damnation Creek Trail. After about three-fourths of a mile I took a turn onto the Coastal Trail. This section of the Coastal Trail lay inland on what was the original Redwood Highway. The highway had been built in the 1920s and abandoned in 1935 because of the difficulty in maintaining it — it kept crumbing and was beset with rockslides. (Ironically, on the drive to the trail head, my friend talked about recent discussions to move the current road further inland because it too is crumbling.) In spots, the pavement with the white center line showed through, and even a few of the original mile markers remained.

I’d felt a moment of trepidation before I got out of the car — since there was no phone signal at the trail head, I would not be able to turn back if things got rough because there would be no way to call my friend for a ride back to town. But as soon as I got onto the trail, my trepidation vanished to be replaced by a smile. My smile widened when I turned onto the old road. Pure magic. Not a hike so much as a perfect walk in the woods. I could swing along, enjoying the day, the scenery, the forest without having to worry about where I was placing my feet. I saw a couple of people toward the beginning of the trail, but for three hours I saw no one. Just me and the magical place.

In spots, the road all but disappeared, leaving a narrow trail crossed with fallen trees or buried under rock, but those places were quickly navigated. Somewhere along the way, the old highway disappeared altogether. I think it was right after the viewpoint where I stopped to take a photo of the bay far below. (In the photo, the ocean is barely visible beneath the fog. In fact, from that point forward, my journey was accompanied by the lonesome call of the foghorn.)

The narrow trail along the bluffs began with a steady half-mile climb that had me panting. Halfway up, I found a fallen tree that had been sawed to pieces to remove it from the trail, and the thick logs had been cut into seats. I figured that was a good place for a snack. Unfortunately, so did the mosquitoes. Before I could sit down they began snacking on me (despite the citronella bracelet I wore that was supposed to repel the bloodthirsty critters), so I continued on my way. I felt good. No aches or pains. No tiredness. Then, toward the end of my journey, came the toll for the magic trek along the ghost highway. (Magic always comes with a price. Everyone who has ever read a fairy tale knows that.)

I began a long downhill stretch. Steep and gnarly, the path was still easy enough to navigate. Not fun, exactly, but not gruelling, either. Then I turned a corner. The trail became even steeper, but worse than that, it was all loose dirt with looser rocks. Oh my. I wished I had a second trekking pole, but the time for magic had passed, and my wish wasn’t granted. So I set off downhill. Slowly. Very slowly. The rocks under my feet kept sliding, taking me with them. I lost my balance several times but managed to stay on my feet. When I saw a switchback up ahead, I figured the terrible trail was about to end. It didn’t.

On every hike, there comes a moment when I realize I am way out of my depth (or way over my head — choose your cliche) and all I can do is endure. So I kept going. One exhausting step at a time. After about a half hour of this, I saw a young man climbing toward me. He said I was almost to to the end, and asked if I’d come from the highway (where the trail had started). When I said yes, he responded, “Props to you.” Whatever that means.

I continued downhill on that treacherous path, heartened by the thought that the ordeal would soon end, but it didn’t end. I did. I was just standing there, unable to move another step, when a man climbed up the trail. As he passed me, he said, “You’re almost down. The trail flattens out after the next curve. The parking lot is on the left.”

But it didn’t flatten out. Still, I knew the end would come, so I kept descending. And yes, that terrible path did end. Eventually. But the parking lot was still a half mile away on a gentle incline that was almost too steep for my shaking legs to climb.

Writing this, I find myself smiling. Not about the final descent (it lost 1000 feet of elevation in a half mile) or my aching feet but about walking the ghost highway. There were times I could hear the sounds of automobiles passing. I’m sure the sounds came from the nearby modern highway. Well, almost sure. 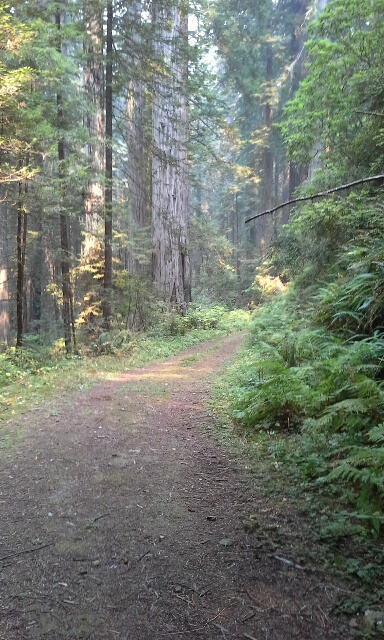 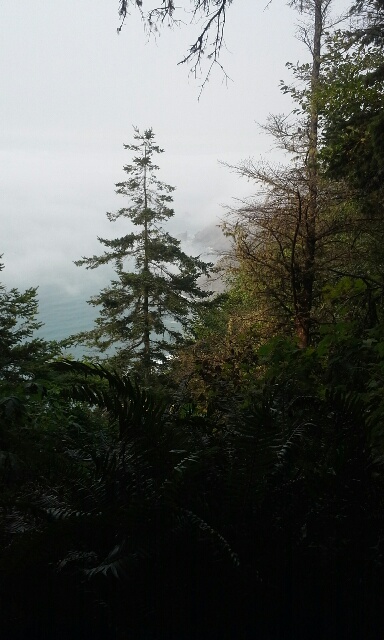 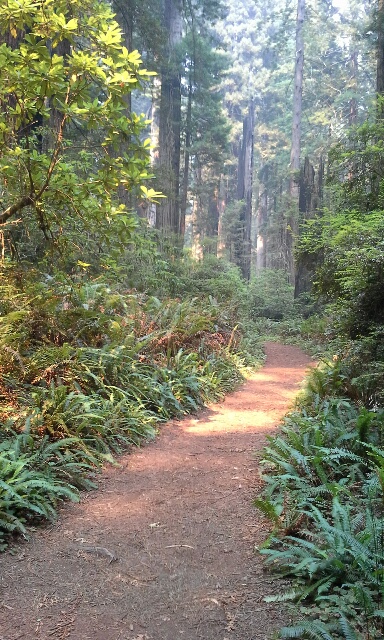