I Promised Myself I Wouldn’t Do It, but I Did It Anyway

When I started on this journey, I promised myself I wouldn’t overtax either my car or myself. I planned to take it easy, to stop frequently and not to drive more than two or three hours a day before setting up camp.

Apparently I am not good at keeping promises to myself.

I felt excited yesterday morning as I headed to Big Bend National Park. I’d been interested in the place ever since I found it high on a list of dark sky parks, parks where there is so little light pollution, you can see deep into space, and I looked forward to spending a couple if days exploring.

Although Big Bend was only about three hours from the motel where I spent the night, it felt as if I’d been on the road for many more hours than that, probably because the day was so very hot and there was so very little to see — miles and miles and miles of uninteresting desert. I suppose if I hadn’t spent more than a thousand hours hiking in the Mojave Desert the past few years or if I hadn’t recently been wooed by the colorful Sonora Desert in Arizona, I might have been more impressed. (Though I was thrilled to see a few bluebonnets lining the road in places.)

Oddly, as soon as I hit Big Bend, my car started acting up. The cheap gas I had to buy probably had more than the usual amount of ethanol, and my car hates ethanol. Also, since there had been no place to stop, I’d driven straight through to park headquarters, and when I restarted the car after checking into the park, the poor thing was vapor locked. (I just googled “72 VW vapor lock,” and found that apparently vapor lock happens more frequently when it’s getting time to have the valves adjusted, and it is getting close to that time.)

But, trooper that my bug is, as soon as it worked past the vapor, it did fine, but I started acting up. I drove more than an hour around that immense tract of land looking for an available campsite in the far-flung campgrounds, and the only ones available were cramped together in a partly flooded open lot. For some reason, the whole situation made me feel uneasy, I had lost interest in the park, and I simply didn’t want to stay.

By the time I finally found a room at a time-warped but very quiet motel in tiny town fifty miles from anywhere, I’d been driving for more than seven hours with just a couple of quick stops for gas at unattended gas stations. (Yep, just isolated pumps. Nothing else. There truly is not much here in southwestern Texas.)

The tediousness of the drive today made me exceedingly grateful I gave up any idea of walking across the country. Even if the logistics weren’t ridiculously difficult to figure out, the terrain would be impossible. It was hard enough driving through this vastness: walking it would be deadly.

I’m wondering what today will bring. Big Bend was my last planned stop. Except for a couple of arrangements for meeting up with friends, I’ll be winging it from now on. I hope I do a better job of taking it easy than I did yesterday. 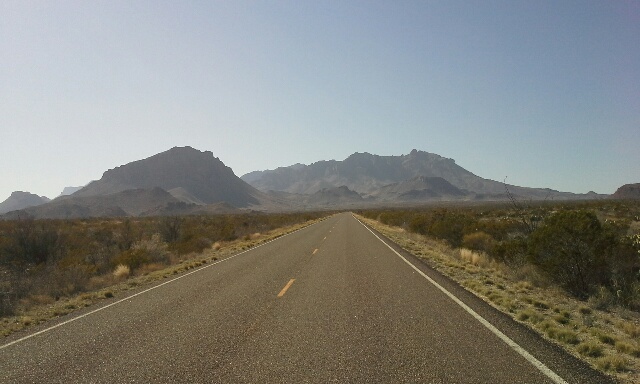 7 Responses to “I Promised Myself I Wouldn’t Do It, but I Did It Anyway”