When I talk about how meeting people on my cross-country trip affects me, a friend tells me that I shouldn’t underestimate how my contacts with others affects them.

I do think about it at times, especially the chance encounters — the tow truck driver in Port Richey who took a picture of “Herbie’s brother” for his Love Bug loving little boy. The men who get joy of changing the oil and doing other maintenance on such a work of art. The older women who remember the fun they had in a similar vehicle and the young ones who dream of owning such a cute car.

I saw a billboard for an automobile museum that said, “They are not cars. They are time machines.” This never seemed as true as the day I visited a VW dealer — my car looked as if it had driven straight out of the 1970s into a 2016 showroom.

And what about the girl I met in the woods? There she was, sitting by herself in sorrow, and a woman appears and offers her a hug.

But mostly I know the story from my side, at least I think I do. It seems as if we live multiple lives at once — our everday life, our spiritual life, our intellectual life, our emotional life, our mythic life. It’s the mythic aspect of my journey that I am thinking of today.

When I left Hocking Hills and drove back through Columbus, I tried following US 33 through town, thinking that despite traffic, it would be the easiest way to get out of town and on my way to Marshall, Michigan to see the Honolulu House.

I got lost in the labyrinth of detours around construction zones, not just geographically lost, but mythically lost. Afterward, I seemed to be driving to no purpose, just futilely racking up the miles, with no sense of adventure or direction.

I finally found the road that cuts diagonally through to Fort Wayne, but it turned out I was on the wrong road. I had intended visit a special candy store someone had told me about, and by the time I realized I was going in the wrong direction, I was too tired to turn around. So I kept driving and almost ran out of gas because I couldn’t see a gas station anywhere on the road.

I made it all the way to Battle Creek Michigan when I belatedly discovered a message from a woman in Ohio, who wanted to meet me as I did her. I felt terrible because it was too far to turn back, but then I thought, “Why not? Who said I always had to keep moving forward?”

So I backtracked and discovered I was still moving forward. The road was always before me, my eyes focused on the path in front of me with only occasional glances behind to keep me centered. There was not even a sense of repetition since I saw everything from a completely different viewpoint. In Indiana, bright pinkish-purple redbuds lined the road in broad swathes, trees that had not at all been visible when I went the opposite direction.

And I realized that so it is with life — even if we feel as if we are backtracking, we are always moving forward, always changing, often seeing the same things with a different perspective.

I must admit that a good part of my decision to go back to Ohio had to do with having a second chance at visiting the Coons homemade candy store. Coons Candy is a five-generation store preparing to celebrate its 100th anniversary. They make much of their own candy, toffee and fudge being specialties and, as the person who recommended it said, Coons Candy was definitely worth a visit.

I roamed the store, exchanged stories with a few members of the family, bought a sampling of their wares, and took a photo of them.

I left feeling as if I’d found the self I had lost during my previous sojourn in Ohio, as if somehow I was supposed to go to that store, as if it were a connection I needed to make like those connect-the-dot puzzles I used to like in childhood. If you missed a dot or didn’t connect them properly, the picture didn’t make sense.

And that turned out to be the case here. As soon as I connected that particular dot, the next steps of my journey appeared. I was invited to stay at an ex-sort-of-sister-in-law’s place for a few days, and a friend asked me to housesit later in the month.

And so it goes, this mythic life of mine. 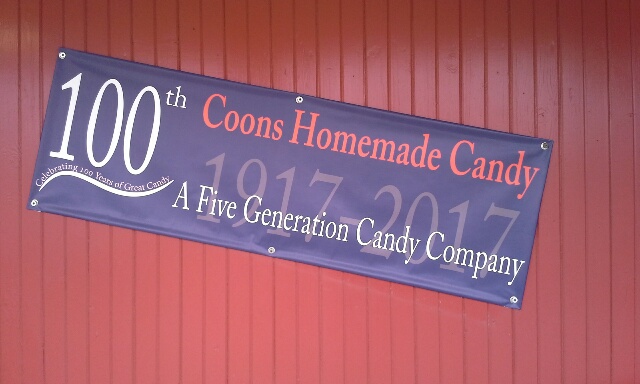 9 Responses to “Connecting the Dots”