When You Have to Go

It seems ironic to me, all this furor over who can or cannot use a woman’s restroom. At any public event, there are long lines for the women’s, and nary a soul near the men’s. Even in not so crowded places, there is often a line for the women’s. When Jeff and I traveled together, he would stand watch as I used the empty men’s restroom while a line of women eyed me in appalled envy. Even now, in an emergency, I have sneeked into an empty men’s restroom. (If anyone saw me as I left, I’d glance back at the door on my way out, do a double take, and give him a sheepish smile.)

In recent months, during my (so far) 9,000 mile trek, I have used a variety of restrooms and non-rooms. Public restrooms, too many to count. Bathrooms in people’s houses. Campground facilities. Pit toilets. Port-a-potties. Bushes. The verge of a deserted desert road. Yogurt containers. (The best piece of tent camping advice I ever received was from another woman. She suggested I take a quart yogurt container into the tent for late night emergencies. The container easily contours to fit, and the cover made it spill proof.)

In all my travels, the only time I have ever seen a man stand in line to use a restroom was in a gas station convenience store that had only a single bathroom for all comers.

I have been in public restrooms so filthy, I couldn’t bear to touch any part of them or even take a single breath. (In one case, I wanted to go behind the building, figuring it would be a heck of a lot cleaner, but I didn’t want to give a peepshow to the grungy looking folk hanging around. In that particular instance, I was on my way to the strange folk in the Blue Ridge Mountains. I should have taken it as a sign, and kept going north.)

The weirdest restroom I was in had a toilet and a urinal, a condom machine with girly pictures and a tampon machine, a 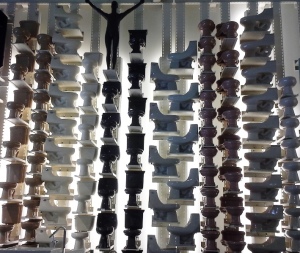 s if it couldn’t quite decide what sort of bathroom it was. (I had to check the door on the way out, thinking I was in the wrong place, but no, it said “ladies” on the door. I was apparently in the world’s only transvestite bathroom.)

The absolute most luxurious public restroom I’ve used was in the Kohler Design Center in Kohler, Wisconsin. It truly was a restroom, complete with comfortable chairs in the ultra-artistic room. (Still, there is no way I would ever rest in a restroom. I can’t imagine what sort of effluvia has settled into that plush upholstery.)

Restrooms right now are a touchy subject, and I know I’m making light of an issue that is causing all sorts of ruckus (because although I feel bad for folks with problems, I can understand people’s worry that if it becomes legal for a man to use a ladies restroom, it becomes impossible to keep predators out. All they have to do is say they see themselves as a woman.)

But that is not my fight. I have no sympathies for young folk or even middle-aged folk of any gender without bladder issues. What we really need are age-segregated toilets. One especially for older women who can rush in, relieve themselves, wash their hands, and then go. No fuss. No muss.

I am temporarily in a place where I have many toilets at my disposal. Two very lovely bathrooms (well, one large bathroom and one vast shower room) for my private use and one semi-public room. But in a couple of weeks, I will be back on the road, and it’s anyone’s guess where I will go when I have to “go.”

Incidentally, the photo attached to this post is one I took at the Kohler Design Center. If you look closely, you will see that the sculpture, which took up an entire wall, was created from dozens of stacked toilets.

9 Responses to “When You Have to Go”