The Truth of Me 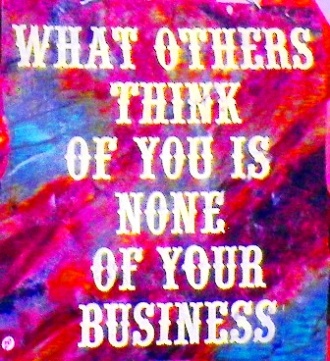 Once I saw a plaque that said, “What others think of you is none of your business.” At first, I recoiled in disagreement, then I thought of the various ways that what other people think of us is our business, and now, finally, half a decade later, I have come to agree with the sentiment.

During the past few years, different friends have accused me of various heinous character traits. One accused me of being negative, one often told me I was contradictory, and one, more recently, said I was cruel. And somewhere in there, a relative more than once called me an ungrateful bitch.

I’m sure, along the way, others have called me other not-so-nice things, which luckily, I don’t remember. No one (unless of course, she is a negative, contrary, cruel, ungrateful bitch) can bear thinking she is such a ghastly person. I don’t suppose it will come as any surprise that I seldom have anything to do with any of those people any more — it’s too hard to live down to their expectations.

And truly, what they think of me is none of my business. Those adjectives reflect more their own experiences at the time than mine.

On the other hand, I do tend to believe people when they say I am kind, or special, or very interesting. While I am lapping up the accolades, a small voice in the back of my mind whispers, “if you ignore the bad things people say about you, shouldn’t you also ignore the good?”

Ah, but it is easier to live up to the nice things since I do think I am kind. Or at least, I try to be. And I do want to be special and interesting even if those traits are more of a reflection of the speaker’s specialness and interestingness than mine.

So what’s the truth of me? I was going to list what I thought were my not-so-admirable traits along with the good ones, but decided that maybe what I think of me is none of my business, either.

I’ll just be. And leave the thinking to others.

2 Responses to “The Truth of Me”