In hiking jargon, a thru hike is from end to end, from the beginning of the trail to the end of the trail, though it doesn’t have to be done that way. Because of the immense throng attempting thru-hikes on the iconic trails, the starting point can be insanely packed, so some people are splitting the trail in sections, maybe beginning in the middle, going to the end, and then getting a ride back to the start of the trail, and hiking to the middle where they began. Apparently, as long as you finish the trail in a year, it’s considered a thru-hike.

It sounds good — taking a year to hike the trail. But there isn’t really a full year for the hike when you consider the heat of the desert in summer, the late snow packs and early snows in the high country, streams swollen with melt-off, fires, and a thousand other weather related issues. The hiking season is usually six months, which means a lot of miles per day when you’re talking about a total distance of 2,650 miles. 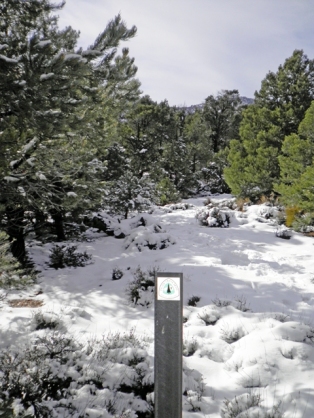 It would be nice if I could do a thru hike, but I’m not an athlete, and I have no aspirations to be one. I am a saunterer, off to see what I can see, out to be what I can be. If I get strong enough to walk a lot of miles, that’s fine, but I’m satisfied with five to seven miles a day. Which means approximately 442 days for me to do the entire Pacific Crest Trail. I bet taking it slow and easy, and not having to push through heavy weather or harsh aches and pains would make the trail a lot more like a walk in the park than an endurance test.

One other realization that showed up this morning, and a big change from other times I thought of doing the trail, is that the logical place for me to start would be at the beginning. The southern part of the trail is desert. Hmmm. Desert? Aren’t I getting myself acclimated to hiking in the desert?

Whenever I’ve thought of doing a long distance hike on the PCT, I thought about starting after the desert — the desert section frightens me because of the need to carry extra water. But now that I have gotten to like the desert so much, hiking the desert section sounds wonderful. Well, except for the water situation. Perhaps it would work if I hiked the desert section in the fall, though by then, some of the seasonal water sources will have been turned off.

If the desert sections were simply desert, that would be a perfect long-distance hike for winter because although water would still be a problem, there wouldn’t be as great a need for hydration as in the heat of the summer. But those desert sections contain mountains, too, which means snow.

How do I know all this? Oh, the internet is a wondrous thing! I spend way too much time reading articles about the trail, about gear, about survival, about the various dangers and wonders.

It could be that because of all this research, I will have mentally spent so much on the trail that my mind will believe I have already hiked it. Then it will stop urging me to go adventuring, and I can stay inside with my feet up, reading about those people with blisters and swollen feet and worn-out shoes who actually are hiking the trail.

Like Loading...
Posted in Adventure, life. Tags: a long long long walk, a walk in the park, desert sections of the PCT, hiking the desert, long distance hike, Pacific Crest Trail, the desert section of the pct, thru hike. Leave a Comment »