There’s a Trail Up in Them Thar Hills

Although I had planned the trip to Seattle with great detail (only to have that entire plan go out the window even before I set wheels on the road), I didn’t have any plans at all for the return trip except for one — I wanted to take a look at the Pacific Crest Trail where it crossed a highway in Washington. As it turned out, there wasn’t much to see but a vague path covered in snow. 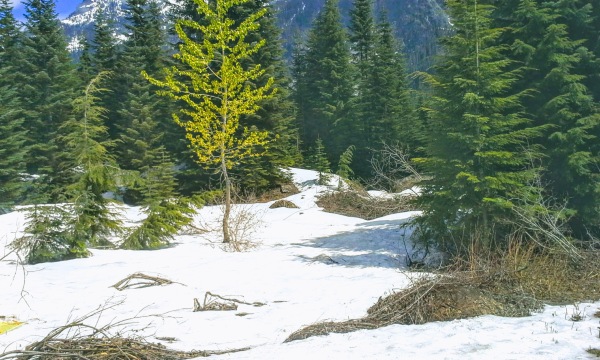 Later, I checked out the trail in Oregon where the melting snows left behind a bit of a marsh. And mosquitoes. That was the only place on the whole trip where I was bitten. Badly. And it wasn’t even mosquito season! Other people who think of hiking the Pacific Crest Trail might fear bears or cougars, but it’s the swarms of Oregon mosquitoes that terrify me. I don’t know if there is enough mosquito repellent in the whole world to entice me to do the Oregon part of the trail, and yet, Oregon is so beautiful that it would be a shame not to experience more than the few steps I took on the Oregon PCT when I was there.

But I’m getting ahead of myself. I am still a long way from even thinking of walking the trail. Whatever strength I’d developed before catching a cold and then going on my trip is long gone, so I will have to start over, and considering the coming heat, I’m not sure how much backpacking practice I will be able to do this summer. Still, this impossible dream of mine remains, and I can feel the trail waiting for me, hiding somewhere up in these mountains. Eeek.