What a Wonderful World

Two years ago, my youngest sister got a couple of rescue kittens. She claims they walked around the house saying, “Wow, wow, wow,” because they couldn’t believe they were living in such a wonderful place.

(Below is a gratuitous Pat and Cat photo. It really has nothing to do with this post, but I never before got to post a picture of a cat. Besides, it’s interesting to see myself as others see me — I had no idea my sister was taking this photo. I was laughing because she said Isabella liked me — that if a cat turned her back on you, that meant the cat trusted you, and I said the cat was only warming her behind on the heat emanating from the computer.) 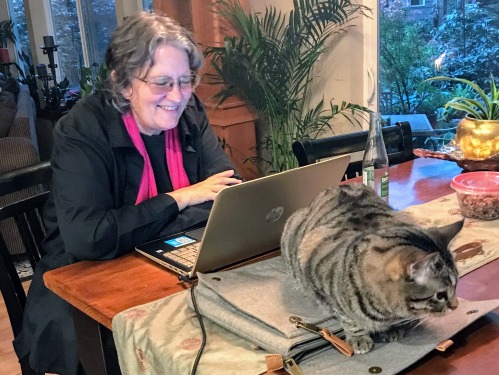 Driving back from my visit to Seattle, I often thought of those cats because I kept hearing myself say, “Wow. Wow. Wow.” Everything I saw seemed astonishingly beautiful. Often there was no place to stop and take a photo, so I had to memorize the scenes, such Mount Shasta appearing out of the clouds for one glorious and shining moment, the abundant wildflower bloom and vibrant greenery along the side of the road, the piney mountains sweeping down to grassy meadows and the meadows sweeping down into the desert. I have no idea why the world seemed so spectacular that day. Maybe I was still giddy after the successful visit with my sisters. Maybe it was the perfect weather or the perfect time of year. Maybe, after being forged in the cold fires of grief, I had come to a place of new clarity.

The reason doesn’t really matter. It’s only important that I could feel the wonder of that day, enjoy the world spread out before my eyes, and surrender to the surprises. At one point, I drove around a curve and had to brake suddenly because I was so astonished by what I was seeing.

Luckily, there was a place to pull off and get out of the car before I caused an accident. The lake far below in the shadow of the mountains was the loveliest shade of green I had ever seen. Is Mono Lake always that color? I don’t know. But I was blessed to have seen those waters with my own eyes. Later, when road construction forced me to halt by the lake itself,

I realized that everything I was seeing had never been seen before by anyone and could never be seen again. We all have a different point of view tempered by our experiences, the angle from which we see a scene, the way the light hits at the very moment we look at something, so the world I saw that day was seen only by me.

Wow. Wow. Wow. I couldn’t believe I got to live, if only for a day, in such a wonderful place. 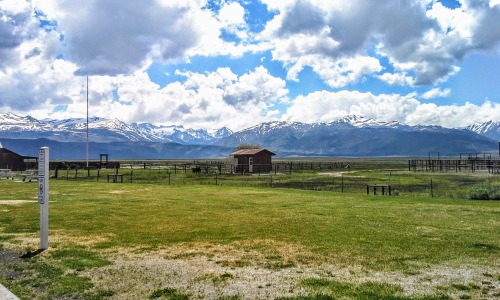 4 Responses to “What a Wonderful World”

« Feasting My Eyes and My Soul
There’s a Trail Up in Them Thar Hills »
%d bloggers like this: