Point Where You Want to Go

At ballet class the other day, I was practicing chaine turns and not doing a very good job of it. Chaine turns, in case you don’t know, are those often rapid turns performed in a straight line across the floor or a stage, moving from one foot to the other as you go. To keep from getting dizzy, you need to “spot” — to find something to focus on as you’re turning, and when you rotate out of sight of that spot, you need to whip your head around so that you can again focus on the spot. Trying to learn such a step after a certain age is difficult because one’s head does not whip around fast enough, so not only do you get dizzy, you end up not going where you want to go.

Seeing my difficulty, the teacher suggested pointing to the spot as well as looking at it on the assumption that where you are pointing, there you will go. And it worked. I mostly got to where I wanted to go. Still dizzy, but I got there. 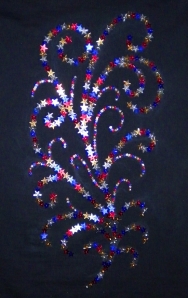 It seemed to me such a profound bit of advice, “Point where you want to go.” If you’re not pointed toward where you want to go, it’s hard to get there because we tend to go where we are looking. If we’re looking behind us or are distracted by side roads, it’s hard to keep focused on the goal. (It seems to me this is both metaphoric and physical, pertaining to actual physical movements and also pertaining to one’s journey through life.) Even something simple like gesticulating as we’re walking tends to keep us from walking in a straight line because we’re pointing everywhere but where we want to go.

One obvious image comes to mind as an example of pointing where you want to go. I’ve seen baseball players sometimes point their bat, in a grandstanding pose, toward the outfield where they aim to hit a home run. (Well, seen it in movies; I don’t know if they actually do it.)

Writers do the same thing, pointing where they want to go. In writing, such pointing is called foreshadowing. We writers need to know where we are going so we don’t get off track. and we need to know where we are going so we know to stop when we get there. We also need to give readers hints of where the story is pointing so they can find their way to the end, but we need to make sure readers don’t know where they are going until they get there, otherwise the suspense is lost. Hence, in writing, dizzying chaine turns keep the reader focused on the constantly changing twists and turns of the plot and not the end.

I feel so very cultured using a ballet term, but ironically, my very use of term is an example of the importance of sometimes not pointing where you want to go. I would never have made a point of taking ballet classes. It would never even have occurred to me, but when the option was offered, I grabbed hold of it. And now I am focused on the classes. (And yet I was looking for something to focus on, so maybe that counts.)

It’s what life, dance, and writing is all about.