Everyone who knows anything about writing or reading novels knows that you have to start with a flawed character. Well, everyone but me. I don’t believe in flawed characters, just characters that come alive.

Tell me honestly, except for a few physical attributes that you might not like about yourself, do you think you have flaws? No, of course you don’t. You think you have problems. You laugh about your quirks. You are beset with internal conflicts. You might even have a list of traits that you try to work on, such as trying to be kinder or more disciplined, but you don’t have flaws. You are who you are. All the parts, good and bad (and who is to say which is which) make up your character.

To me, the character flaw is like the Persian Flaw. The Persian rug makers purposely put a flaw into each of their rugs supposedly because of their belief that only God can make something perfect. That speaks to me of arrogance, to believe you are so absolutely perfect you have to create a flaw to make yourself less than perfect. It’s the same with the character flaw in writing. If you create a realistic character, there is no flaw, just a character w 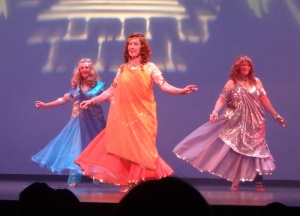 ith a mixture of admirable and not so admirable points. To add a flaw on purpose takes away from the realism of the character. At least to my way of thinking, and now I have proof of sorts.

I am writing a novel about a fictitious death in my dance class. I began using all my classmates as characters, but gradually I have been camouflaging them by changing names and creating omnibus characters — combining two or three classmates into a single character to avoid hurting anyone’s feelings. And I had to create a couple of wholly fictitious characters because a mystery is primarily about unraveling the back story to find out why the victim was killed and why the killer was so motivated. I didn’t want to create fictitious backgrounds for my classmates because when it comes to murder, there are no innocent folk, or at least not often. The victim — and the red herrings — usually has done something to set the whole thing in motion. And it’s those “something”s I worried about attributing to people I meet every day. Who needs that kind of pressure?

I started out with myself as the unreliable narrator, and when I blurred the edges of the others in my class, I kept the real me as a character. If I had known how easy this made writing a novel, I would have done it long ago! I don’t need to create a character. Don’t need to do psychological profiles. Don’t need character arcs or family trees. It’s all here, in my head. In me.

And especially, I don’t need to create flaws. I don’t particularly consider myself a flawed character, though I do have some character traits that are less than saintly. And I have a few other traits that come from lapses.

For example, I tend to believe my memory. Whenever I have gotten into a he said/she said or she said/she said argument, I can often find some sort of corroboration for my side, such as in a text or an email, which adds credence to my belief. Also, in dance class, I often remember steps when others don’t. However, there are a few steps from a dance we performed eighteen months ago that are completely gone from memory. Erased. I watched a video of that performance to see what the steps in question were, and even though I could see myself doing the steps, I have no memory of them. Is this memory lapse a flaw? Not particularly. It’s just a . . . lapse. Is the insistence on the accuracy of my memory a flaw? No. That’s also just a lapse.

The best part of using myself as a character is that I never have to worry about creating a conflicted character. Every page illuminates my internal conflicts about death, finding my place in the world, trying to do the right thing and failing, dancing to a different beat. (I think that’s why I like dancing so much — for once in my life, I get to do exactly what everyone else is doing without the conflict of having to choose between being out of step with the world or being out of step with myself.)

So there you have it — proof that you don’t need flaws to create a good character. You just need realistic traits.

Note: Please don’t leave comments telling me that there is no such thing as a perfect character, that they need flaws to be realistic. I’ve heard all the arguments. You believe what you want. I know the truth. Oops. Did I just show a character flaw?

Character as Fate and Fate as Character

Heraclitus believed that a person’s character is their fate. Character — the sum total of a person’s traits — influences the choices a person makes, and the consequences of those choices ultimately become that person’s destiny. Or not. Much of life is luck, happenstance, and totally out of our control, though we tend to believe we have much more control over our lives than we really do. But that’s not an issue here because this is a writing discussion, and in our story worlds everything is under our control, and what our characters do determine their own fate.

This is most obvious in a tragedy — a character comes to an unhappy end because of a flaw in his or her own character, though in today’s stories, because readers like a more optimistic ending, that fatal flaw is often balanced by a special strength. But character/fate works for other types of stories, such as a thriller where a character becomes obsessed with finding the truth, and that obsession leads to both the character’s fate and the end of the story.

For example, In Daughter Am I, a young woman is determined to find out the truth of who her grandparents were and why someone wanted them dead. That determination overrides her usual placidity and takes her on a journey that eventually leads her home again, changed forever. She really did find her destiny because of her character.

I wonder if the opposite is more true (if truth has degrees), that destiny is character. Does what happens to us, both the actions under our control and those beyond our control, determine who we are? Determine who our characters are? This was a theme I explored in More Deaths Than One. So much happened to my poor hero Bob that was not under his control, yet what was under his control — how he handled his fate — made him the man he became.

Any discussion about fate and writing would also have to include the question: does the writer’s fate affect the character’s fate? None of my books have totally happy endings. There is always a pinprick of unease in the background, but the book I am now contemplating — the story of a woman going through grief — is going to have even less of a happy ending. Perhaps because I know the ending of my own love story? Not my story, obviously, since I’m still here, but the story I shared with another. Except for my work in progress (the one that’s been stalled all these years) the stories I’m thinking about writing now all end up with the characters alone.

When I wrote the first draft of my novel More Deaths Than One (and the second draft and the third) I had the hero Bob meandering around his world trying to unravel his past all by himself, and it was boring. Did I say boring? It was moribund. The story went nowhere because there was no one for Bob to butt heads with.

In the fourth draft of More Deaths Than One, I gave Bob a love interest, a waitress he met at a coffee shop. (Hey, so it’s been done before. The poor guy spent eighteen years in Southeast Asia, and didn’t know anybody stateside. How else was he supposed to meet someone?) That’s when the story took off. He had someone to butt heads with, someone to ooh and aah over his achievements, someone to be horrified at what had been done to him.

From that, I learned the importance of writing scenes with more than one character. And yet here I am, once more falling into the black hole of writing characters alone because I can’t visualize them ending up with anyone.

Which leads me to my final question: could the fate of the character also influence the writer’s fate? If so, maybe I should decide where I want to go from here, and write my destiny. Or  I could just wing it and see where destiny takes me and my characters.

Pat Bertram is the author of the conspiracy novels Light Bringer, More Deaths Than One, A Spark of Heavenly Fire, and Daughter Am I. Bertram is also the author of Grief: The Great Yearning, “an exquisite book, wrenching to read, and at the same time full of profound truths.” Connect with Pat on Google+