Dealing With the Debs 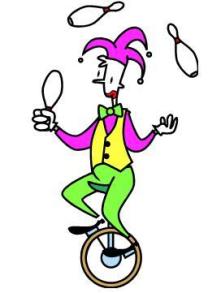 Ever since I started writing about my ongoing problem with a Deb, I’ve been collecting enough hints on how to deal with such characters to write a primer.

(For those of you who haven’t been following this saga, Deb is — was — a narcissistic character in Madame ZeeZee’s Nightmare who has come into my life for real, and has been bedeviling me for the past year.)

Following first my own inclinations and then advice from friends (a couple of whom are therapists), this is the list of what I have done so far:

I tried ignoring her, but for the Debs who love attention, being ignored makes them ramp up the pressure for attention.

I tried setting boundaries, real physical boundaries (before my arm was completely healed, it frightened me to have people invade my personal space) and asked her to honor the boundary, but she took the request as a challenge and refused.

I tried being super nice, as a friend suggested, but somehow, the Deb took this as a sign of my conceding, and she stepped up the aggression. (You know the kind of aggression I’m talking about — small insults she laughs off as “just funning” and make you sound foolish if you complain about them.)

I tried standing up to her, in fact got right in her face, and she gave me the innocent act. Though, with the Debs, it’s hard to know if it’s an act. I get the impression sometimes they really do think they are innocent of abusing others.

I tried running away from her — literally running — but she completely misunderstood and thought I was running from someone else.

I just recently tried Ho’oponopono and though saying those phrases (I love you. I’m sorry. Please forgive me. Thank you) didn’t seem to work, it did help me to dispel the bad energy as soon as I was alone.

I’ve also just recently tried to use that pent-up energy to propel me into doing something strenuous, for example, the last time, as soon as I got home from class, I strapped on my backpack and went out walking, even though I was already exhausted from class.

One thing I haven’t yet tried is to do standing Kegel exercises in class. Apparently, the pelvic muscles are the ones that dispel stress, and by doing Kegels, you can find your center.

Another thing I haven’t yet tried is to give myself permission to fixate on the issue when I’m alone, which, along with the Kegels, is a suggestion from a therapist friend. She advised really giving in to the energy of the conflict, but to allow myself no more than say thirty minutes to obsess. That seems like a good idea. When I get something in my head, I fight the thought, which keeps it going around and around and around. By giving the thoughts space and validity, maybe I can stop the cycle.

It does makes sense — when you try to think your way out of such a problem, it causes circular thinking because you can’t logically find a way out of an illogical situation.

Eckhart Tolle says, “True intelligence is to rise above thinking as the source of intelligence.”

So, there you have it — a brief compendium of ways of dealing with the Debs and the negative energy they spew.

If I had known from the beginning that this particular real-life Deb was my Deb, my creation, I might have done things differently before they escalated, but how was I to know? One does not expect one’s nemesis in a novel to appear in one’s life. Now, I’m to the point where I have no desire to deal with her — my only hope is to keep that energy from affecting me, and to dispel whatever energy I do allow to affect me.

I Love You, I’m Sorry, Please Forgive Me, Thank You

Several months ago, a friend told me about Ho’oponopono, a Hawaiian healing process. I’m not sure I would have paid much attention, but I’ve been learning Hawaiian dance, which is very spiritual, and the idea of Ho’oponopono seemed an extension of that spirituality. I really didn’t have anything to say about this form of healing, so I just filed the note away as a possible topic for a blog post someday. I’d forgotten about Ho’oponopono until this morning when I read a comment a friend left on yesterday’s blog post about The Imponderables of Life. The friend commented: The greatest of all powers, it might be said, is the power of forgiveness. 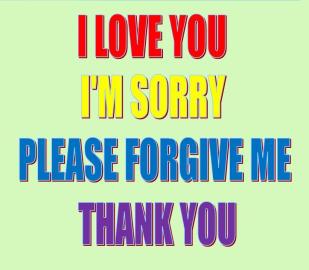 I don’t really understand the mechanics of Ho’oponopono, but it has to do with accepting that we are 100% responsible for everything that happens in the world. So, to affect any healing changes, we first have to heal ourselves. For example, if someone hurts me,  I have to take responsibility for the hurt, and heal myself for hurting me. I also have to forgive myself for the hurt.

It seems like it’s one of those “full circle” things. When we are children, we blame ourselves for everything that happens. If our parents fight, we think it’s our fault, even though it probably has nothing to do with us. Growing up means learning to see beyond ourselves to the truth that we are NOT responsible for everything that happens. That sort of thinking traps us further in the hurt, and besides, we simply are not powerful enough.

We are all linked. In some respects, we are all one. We are all made of stardust, all connected by the same waves of energy, all created from the same nothing/everything. According to Dr. Haleakala S. Hew Len, “For the ancient Hawaiians, all problems begin as thought. But having a thought is not the problem. So what’s the problem? The problem is that all our thoughts are imbued with painful memories, memories of persons, places, or things.”

It’s odd to think that all unknowingly, I’ve been practicing Ho’oponopono, or trying to.

I came to take care of my father after the death of my life mate/soul mate because I knew that one day I would be ready to embrace life again, and I didn’t want to be held back by old resentments and unfinished business. I figured that if I could do for my father what he could not do for me — pay attention, listen, nurture — that I could clear some sort of Karmic debt and free myself. And it worked. When my father died, our troubled shared past died with him. My memories are not tinged with bitterness or regret. They hold no pain, carry no baggage.

A few nights ago, another driver made an error that caused us to collide, but I bear her no ill will, feel no anger. (Of course, if I had been hurt or my car totally demolished, I might have felt differently.) Even though I was not legally at fault in any way, I take responsibility because . . . well, because I was there. It seems strange that we hugged before parting that night, but then, wouldn’t suing her be even more peculiar? A lawsuit would have kept the incident in my life for months to come and caused untold frustrations. A hug, and it was done. Over. Ho’oponopono.

Ho’oponopono means “to make right,” or “to rectify an error.” Those who practice Ho’oponopono believe we are here to make amends. Dr. Haleakala S. Hew Len says, “The intellect working alone can’t solve these problems, because the intellect only manages. Managing things is no way to solve problems. You want to let them go! When you do Ho’oponopono, what happens is that the Divinity takes the painful thought and neutralizes or purifies it. You don’t purify the person, place, or thing. You neutralize the energy you associate with that person, place or thing. So the first stage of Ho’oponopono is the purification of that energy.”

[In a blog a month or so ago I wrote, “It’s rather a literary cliché, one that most of us have come to believe, that the more intelligent a person or species is, the less emotional. Mr. Spock from Star Trek and Lucy from the recent movie Lucy are two such examples. But what if this belief is not true? What if emotion is a form of intelligence, and the more emotional we are the more intelligent?” If the mind is simply a management tool, then perhaps my surmise is correct.]

So how does one purify the energy? By forgiving. By trying to find the place within ourselves where the hurt resides, and telling it/ourselves/the world, “I love you. I’m sorry. Please forgive me. Thank you.”

So much to think about and to learn on this strange journey to redemption we call life.

I love you. I’m sorry. Please forgive me. Thank you.