I’m one of those people who can’t leave well enough alone. In fact, until just now, writing “well enough,” I didn’t even understand what those words mean. Well, yes, of course I knew what they mean, but it’s such a common phrase that I’ve never actually stopped to contemplate the meaning in that particular construct.

“Well enough” is good enough for most projects, though I never aim for such a low expectation. Although I tend to aim for perfection, I am willing to settle for something a bit less. The problems come in deciding what that “less” is. If something offends my sense of balance or perspective, for example, I keep trying to even things out until . . . oops. I go too far in the other direction and have to scrap the whole project. For the most part, I’ve learned to do one attempt at fixing whatever it is that bothers me, and then let it go.

But I couldn’t let my bench project go (the design seemed wrong, somehow), and I didn’t want to ruin the bench, so I photoshopped the photo I posted of the bench to see if a fuller border would work. Then I printed the photo, and played around with different designs for the center, so that when I painted, I wasn’t winging it as I so often do.

I think it turned out well. 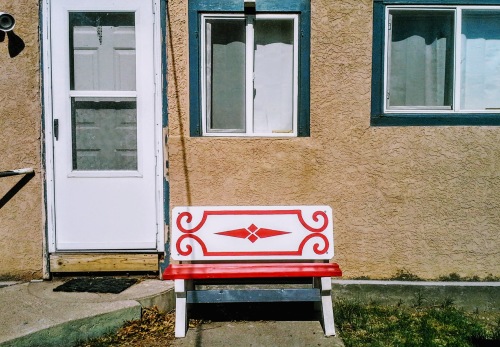 At least that inner critic is silent and if it ever raises its voice to me, I’ll ignore it. The silly thing is, that often what offends disappears into the background, and I never even notice it. For example, when I stuccoed over the dog door in the corner of the house, I thought I did a terrible job. So I stuccoed over the stucco patch and made matters worse. I did leave it alone (though sometimes I wonder if I should try again), and I hardly ever notice the patch. It’s just . . . there.

Well, soon the bench will be “just there” too, and it won’t matter that I spent so much time on redoing the design. It I’ll probably never actually see it again except in periphery. Or in case I purposely look at it.

Still, I’m glad that in this case I didn’t leave well enough alone. At least, I think I am. 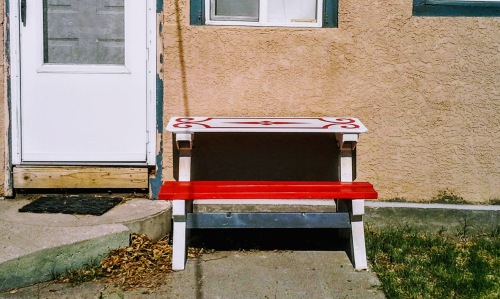