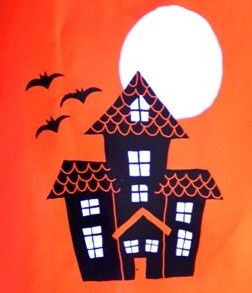 I’ve done well adapting to being a homeowner, but I don’t think I will ever adapt to the sudden and unexplained noises that come with owning an old house. I always imagine the worst, though often, the house is simply sighing or creaking or settling into a more comfortable position.

The search for the source of the noises isn’t always successful, but it has always been benign. Until the other day, that is, when the search led to a rather uncomfortable situation.

It was afternoon. I’d done my stint of gardening work that morning — watering my bushes and pulling up weeds — and I was happily reading (well, reading. It was a Dirk Pitt book. Not exactly a happy series) when I heard a loud noise. I went searching through the house, and the only thing I could see out of place was that the basement door was ajar, though I keep the door shut. (The basement is not my favorite place, and unless you like dungeons, it wouldn’t be your favorite, either.) I opened the door wider, glanced down the stairs, and noticed that the electric switch box was open. I tried to close it, and when I couldn’t, I realized what the noise must have been — one of the workers had blown a switch a few days previously. After he flipped the switch, I’m sure he would have forced the cover closed, and the noise I heard was the cover springing open. I don’t know why it had done that. Perhaps a difference in temperature? Or the pressure of being jammed shut got to be too much? (Though how it could have popped the basement door open at the same time, I don’t know.)

On the off chance that something else caused the noise, I went outside to look around the house. And saw my neighbor. And stopped to chat. And got bitten by red fire ants.

Although I am always interested in new experiences and adventures, there are some, such as that one, that I could have done without. I am truly glad I wasn’t aware of how abominable those bites were back when I was reading the sort of books where people were staked out over red ant hills and left to be ravaged by those hideous beasts. Even just thinking of it, now that I know how excruciating and hellish those bites are, gives me the willies.

If the cover to the electrical panel hadn’t sprung open, I would still be blissfully unaware of what a red fire ant bite feels like. (I’ve had other kinds of ant bites before, and they burned for a few seconds, and maybe itched a bit, but nothing like the big red sadists.)

It just goes to show . . . something. Maybe the vagaries of life.

Next time I hear a noise that I can’t ignore it, though, I’ll be sure to wear a hazmat suit before I go looking for the source of the sound.