A Venue of Vultures

I had the special privilege of seeing one wave of the turkey vulture migration yesterday. The birds kept coming out of a small corner of the northern desert sky, and they continued on toward the south along the Mojave River corridor. Venues (as flocks of turkey vultures are called) gathered overhead, spiraling upward to catch the thermal drafts or perhaps waiting for stragglers to catch up, then that “kettle” would disappear into the glare of the sun. (Apparently these uprising groups are called kettles because they agitate like a boiling kettle.) Then another batch of birds would glide into place, wait for others to show up before they to headed south to catch up to their brethren on their way to San Diego or Mexico or Arizona to spend the winter.

In flight, the buzzards looked lov 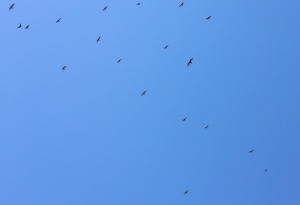 ely, soaring and gliding like hawks, riding the air currents, then speeding along with just a few slow brushes of their wings (a six-foot span). Since they are also non-aggressive, unable to kill prey, the Hitchcock-like scene was completely misleading. (I never did understand why carrion birds are considered lesser birds, as if their inability to kill makes them evil.)

A flock of smaller birds scurried out of their path (perhaps scurry is not a word that can be applied to birds, but in this case their rapid movements and darting flight made it seem as if they were scurrying).

I must have seen hundreds, maybe even thousands of birds within thirty minutes, but I was so enthralled, I only remembered to takes photos when most of the birds had passed directly over my head, so these photos are pretty lame, though you get an idea of their numbers and the path of their flight.

I smiled all day yesterday. It was nice to be taken out of myself, to replace my funk with something so regal and awe-inspiring as the vulture migration. 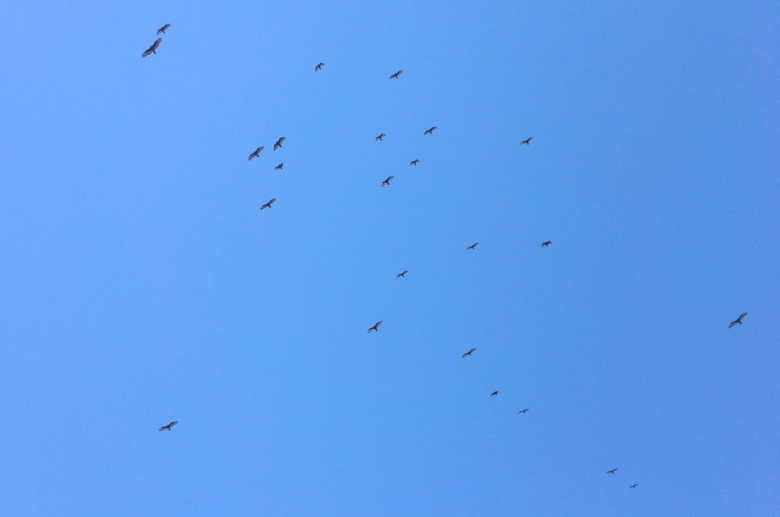 10 Responses to “A Venue of Vultures”