I haven’t even been in town two months, and already I’ve started a brouhaha. It was an accident, but still . . .

I went to the senior center a couple of days ago for an exercise class, played dirty marbles (which is not at all what you gutter-minded folk think it is), and stayed for lunch. Since I walked, I had a hat and jacket, which I had placed on the table where I intended to eat. When lunch came around, that table was mostly full, and someone had shoved my stuff to the end where there was no chair. I asked if anyone minded if I moved a chair there so I could join them, and they all just stared at me as if they’d never seen me before, even though I had previously talked with most of them.

Refusing to give in to a childhood flashback, where no one wanted to sit with me, I just laughed and moved to another table where the occupants were waving me over. “You always have a place with us,” one of my dirty marbles friends said. “Good,” I said with a smile, “because that’s the second time they refused to let me sit at that table.”

It was a nothing sort of comment, but next thing I know, my dirty marbles friend and a woman from the other table were arguing, and the woman was slinging insults. By this time, I was thoroughly embarrassed. It hadn’t been that big a deal. Apparently, those women didn’t want a newcomer to sit with them (it couldn’t have been any reason but that, certainly nothing personal, because I have been all charm and smiles since I moved here!). Except for feeling a moment of discomfort, it didn’t really matter where I sat.

When the director came out to lecture everyone on being kind and welcoming to new faces, I wanted to sink into the floor. And afterward, she hugged me, and told me she hoped I would come again.

Well, I did go again. The next day, there was a meeting at the center about a planned outing to the Royal Gorge. I went to the meeting with a friend. She plopped her stuff down at the same table to which I had been welcomed and asked if there was room for one more. When the women noticed who the “one more” was, they laughed and said, “Pat is always welcome here.”

Then, of course, all the people at the table who hadn’t been privy to the episode had to be told the joke. And during the meeting, there was more talk from the director about being kind to new faces.

I felt like I was back in kindergarten. Recess (exercise), cookies and milk, games, and being told to play nice.

At least this time, I am aware that the contretemps had nothing to do with me. The tensions had been in play long before I got there. My oh so innocent remark was simply the incendiary device that sparked long-standing animosities.

Perhaps the people who are nice to me have nothing to do with me, either, but are simply nice people. Still, I have already made a couple of lifelong friends, women with whom I instantly connected.

Life is good, and an occasional shark in the water merely brings out that goodness. 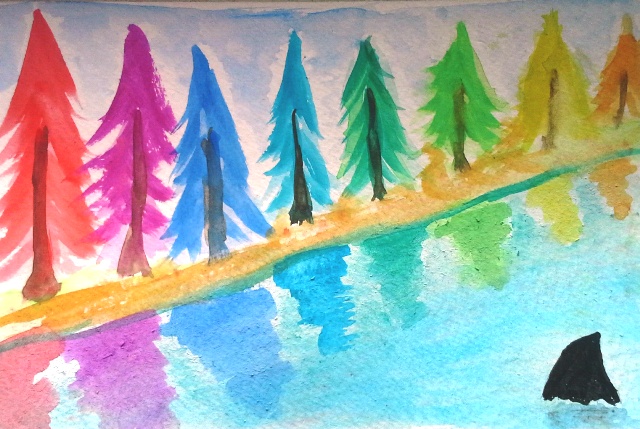