The Joy of Fences

I had my whole property fenced in before we realized that the old garage was not much good for anything, not even a shed, and that it would have to come down. 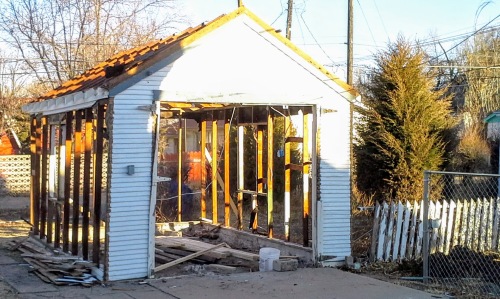 Then, when the shock wore off, I reluctantly let go of my travel funds because I decided that a garage was more important than that one last epic road trip. So most of the fence along the alley had to be ripped out. Not that the fence did anything to keep out trespassers — one snowy morning I woke up to find shoe prints all over my yard. A lock on the gate took care of that problem, but then, so did the fence being gone. If there was no gate, of course there would be no gate for people to open. (A joke of sorts.)

For all these months of construction (or rather, non-construction), I used blue plastic fencing, similar to the blaze orange fencing used at some construction sites, to block off access. It was more of a psychological barrier (at least, I hoped so) rather than a physical barrier because the stuff is rather flimsy. Luckily, there have been no snow storms, so I didn’t have to be frantic about trespassers since I could see no sign of them, though dogs did worry me. Too many the people in the vicinity don’t walk their dogs — they just turn them loose to do their business. It’s bad enough when the dogs are ankle biters, but pit bulls? Yikes.

But yay! Today, the fence was reinstalled. Instead of the fence going straight across the alley as it once did, it now jogs in toward the garage, giving me a huge area to pull into my garage or even a parking space if necessary. 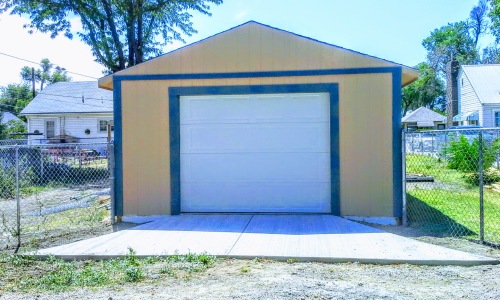 But sigh. I’m still not able to use the garage. It’s getting there, though. The attic insulation is in, the ceiling is up. Wall insulation and OSB boards have been delivered, as well as the garage door opener but have not yet been installed. (One guy has been doing most of the finishing work by himself, and there is no way he can install the opener without a helper.)

Meantime, I am grateful for the gift of this day and will enjoy being fenced in.

4 Responses to “The Joy of Fences”