Where I Am Supposed to Be

When I was starting to come out of the worst of my grief, when life overwhelmed me, I used to take a deep breath, let it out, then tell myself, “I am where I am supposed to be.” The ritual brought me comfort even though I don’t really believe that there are any “supposed to be”s. There just is “is”. And yet . . .

Because of an unexpected series of events, I spent the night in a town I had never heard of. The string of happenstance began even before the encounter between a peacock and the Amtrak bus I was in yesterday. (In case you didn’t read yesterday’s post, a few minutes after I began my trip, the bus I was in collided with a peacock in flight, which destroyed the windshield. The poor bird died.) I would not have been in the bus except for a series of unexpected events — the woman I am going to visit offered to pick me up in a distant town, and the woman I was staying with so kindly agreed to get me to the station at 6:00 am, so that allowed me to take a different and quicker route than I had planned.

As things worked out, it wasn’t quicker (though the hours spent on bus and train remained almost the same). Because of the peacock incident, I missed my connection to Eureka. Antrak put me up in a motel. (A very expensive motel that certainly didn’t use the money to clean.) Amtrak also paid for a taxi to and from the motel, as well as dinner last night and breakfast this morning. All that was wonderful, of course, especially since it will allow me to see the scenery I pass through today. (If all had gone as planned, most of the final leg of this journey would have been I’m the dark.) But all those perks are not what gave last night its “supposed to be” feel.

I’m using my new backpack for luggage, and every time I put the thing on, I had to wonder once again if backpacking, even short distances was for me. And yet, whenever we passed a trail of any kind, I could feel the pull. I’ve always liked mysteries (though it’s really the truth finding I love more than the mystery itself. I like to know esoteric things that not everyone knows). And the pull of the trail is its mystery. Where does it go? What’s around the next bend?

So, after a day spent watching the world pass by my window and wondering what it would be like to be walking instead of being driven, I ended up spending the night in Martinez, in the Muir Lodge, two blocks from where John Muir lived.

That sure gave me pause!

John Muir was a naturalist, co-founder of the Sierra Club and was instrumental in the development of our national parks system. He is something of an inspiration to hikers, the grandfather of ultralight backpacking. And last night I found myself steeped in his aura.

I haven’t been on any hikes recently. I’ve been taking a couple of extra dance classes and also preparing for a show (my class will be doing two numbers at a dance performance put on by the local college next weekend), and I wanted to make sure I didn’t jeopardize that privilege by overdoing it. My body is used to the extra classes now, so when a friend invited me to go on an easy group hike with her this morning, I accepted. It didn’t seem like it would be a very scenic hike — it was more to explore a water system from the 1800s than to enjoy the scenery — but I’ve been trying to walk more in preparation for . . . I still don’t know what. Some sort of long, long, long walk perhaps. And this seemed a perfect opportunity to stretch myself a bit.

We met at a nearby dam and signed in. Since the Sierra Club sponsored the hike, we had to sign a waiver. I didn’t think anything of it — after all, I’d done Sierra Club hikes before, and anyway, it was an easy hike, only three miles, according to the English chap who led the group.

The scenery at our meeting place wasn’t very inspiring — just a lot of dirt bike trails carved haphazardly out of the desert floor by bikers — but after we climbed through the gate meant to keep out cars, and walked leisurely across the top of the dam, there were some pretty sights, including this rare example of fall colors in the desert. 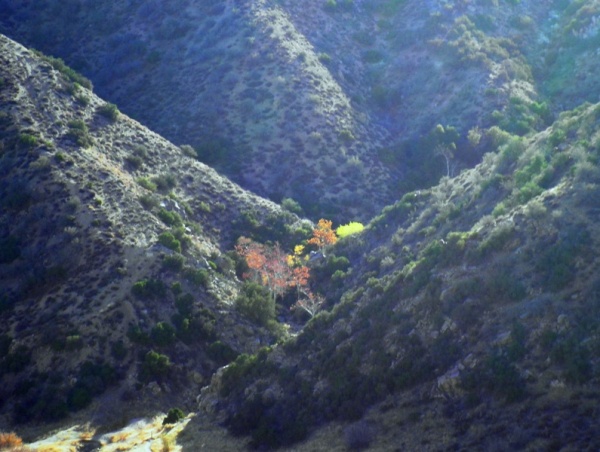 We took a break so everyone could catch up to the leader, and then we continued up the path. The operative word here is “up.” The path started with a gentle incline that got steeper and steeper as we climbed. At one point, the only way I could make it up a sharper than 45-degree angle was on hands and knees. Embarrassing, but effective.

Our leader promised us that was the hardest part of the hike, but then we started our even steeper descent on sand and scree. (I had to pause here and reflect. I don’t think I’ve ever used the word “scree” in my entire life, never had reason to. Amazingly, I was able to dredge the correct word out of my magpie brain.) I wish I could announce that I descended that hill gracefully, but once (okay, I admit it — twice) my feet slid out from beneath me and I ended up “bum sledding” as the English chap called it.

“It’s easy from here,” the chap said when we all made it (one way or another) to the bottom of the path. “Easy from here?” I responded. “Wasn’t the whole hike supposed to be easy?” He said, “When we get back, it always seems to have been so easy.”

But we weren’t yet back. There was still a rusted and rotted water pipe to hike along for several yards (someone suggested that I use my trekking pole as a balancing pole, and it worked! Or maybe it’s all those relevés I’ve been doing in ballet class.) After the water pipe episode, we had to wade through a sand field where my legs sunk halfway up to my knees, ford a river, and climb one last 45-degree hill.

We returned to the cars three and a half hours after we started. Allowing a generous hour for breaks and a snack, we’d been hiking for at least two and a half grueling hours. Even at my slowest uphill pace, I walk a mile in thirty minutes, so I have no idea how long the hike really was. At least four, but probably closer to five miles.

We gathered around for a brief post-hike retrospective. The English chap asked if anyone was hurt. We all took stock and admitted we were fine.

The Relevance of Wilderness

I read an article today that called John Muir’s philosophy irrelevant. In case you don’t know, John Muir was an early environmentalist who believed in our oneness with the earth and advocated the importance of keeping some wilderness areas as undisturbed as possible so we can experience nature in its original state and to ensure that there will be wilderness areas for coming generations to experience. He founded the Sierra Club to further promote his ideas, and while the Sierra Club has gone beyond strictly environmental issues into other political arenas, Muir’s philosophy still holds true. It is important to spare at least parts of the earth from human depredation, because who are we and who would we be without the earth?

Muir’s detractors think his philosophy implies that only awe-inspiring parks are worth saving, and that his vision is rooted in economic privilege and benefits mostly rich white folks with the leisure to backpack, rock climb, and otherwise enjoy the far off places. They say that new generations, especially the diverse communities of working class and minorities, see the world differently than WASPs such as Muir, and that it’s more important to cater to their vision by creating and protecting urban parks and close-in mountain areas.

I don’t know what the rich think — as a matter of fact, until reading this article, I haven’t even seen the phrase “White Anglo Saxon protestant” in years. I’m certainly not a WASP — well, technically I am white, I suppose, though traces of Finno-Ugric blood might skew that a bit. But I am not Anglo-Saxon, protestant, rich, or privileged in the way such folks are said to be.

Nor do I know what the poor or those in diverse communities think. Perhaps they no longer believe it’s important to keep some wilderness areas pristine for the sake of our souls. Perhaps close-in parks are more important to them, but that is their choice. It does not negate the need for hard-to-reach wilderness areas. Besides, most people I know who love to hike or commune with the mountains or find solitude and spirituality in the far reaches of the wilderness are not rich. Some are retired with fixed incomes, some make great sacrifices to be able to afford the lifestyle they love/need, and some indulge their nature-lust in the small increments their time or money afford them.

I’m one of those who like close-in places because of the ease in accessing them. I can walk to the desert from where I am currently staying, and in fact have spent thousands of hours hiking those informal trails. Even if I never went up to the mountains, I still like knowing there are relatively untouched places, and that we as a people value them so much we will protect them.

Seems to me, such an ideal is always relevant.