The Denizens of Route 66

In previous posts, I talked about the Route 66 festival I attended this past weekend, but I didn’t really talk about the people I saw except for a brief mention of the beauty pageant entrants.  And I saw a wide variety of folks.

Some came alone and acted very strange, as if they were alien residents from another planet, but that is typical of the high desert, or so I’ve been told.

Others came in groups, such as the red hat ladies. I wonder what Jenny Joseph thinks of that society. She is the author of the poem “Warning” (When I am an old woman I shall wear purple/With a red hat which doesn’t go, and doesn’t suit me) which inspired the group. A society of women who all dress alike seems the antithesis of the spirit of the poem, which extols the virtue of shucking convention and striving for personal eccentricity. But then, I’ve never been a joiner and don’t much see the point of dressing like everyone else. (I’ve never owned a pair of jeans, so that tells you more about me than you would ever wish to know.) Still, it was interesting seeing a whole slew of purple-pant-suited women in red hats. Added a bit of color to the otherwise drab room.

I met a few writers, though that is nothing new — writers seem to be everywhere, especially writers who are looking for a publisher though they have not written a single word. It’s a good thing not many people showed up, otherwise you’d probably have heard my screams resounding around the word if I had to listen to one more stale and trite plot. (This is the real reason would-be writers are cautioned to read. If they’d been readers, they would know how typical their “brilliant” idea is.)

I sound a bit caustic, don’t I? Being around people does that to me. I did meet a few intriguing people — a couple of artists and a woman who reads Agatha Christie in Chinese for the fun and challenge of it. (I hope she doesn’t get upset with my revealing that, but she was such a fascinating woman, I’d hate to leave off any mention of her.)

One artist (Pete Morris) and I had a delightful conversation about truth in art and writing. He believes that if there is no truth, you have a pretty picture, but not art. The truth may be in the eye of the beholder, the truth might be the artist’s personal truth, or the truth might be a different perspective on a common theme, but there needs to be truth. It’s this lack of truth that bothers me so much about books today. Writers insist they write to entertain, which is fine, but I don’t read to be entertained. I read for truth — the writer’s truth, a different perspective on my truth, or some other facet of truth. I used to find truth even in genre fiction, though now I don’t see much even in literary fiction. (But maybe that’s more because of the vast numbers of books I’ve read than an actual dearth of truth in novels.)

A friend came to keep me company on Saturday, which made the day go by fast, and Pete painted a picture of us. I don’t know what’s the truth of the painting, but the artist did it to preserve a good memory. (Later, he kindly offered the picture to me, but I am not one to have pictures of myself hanging on the wall, so I asked if I could take a photo instead. That way we were both happy.)

Here is the painting Pete did of me. I was so oblivious, I didn’t even know he did it until he showed it to me. If you’d like to see more of Pete Morris’s work, you can see a whole gallery of paintings on his website. (Click here and use the gallery controller to the left of the images to see his pictures.) 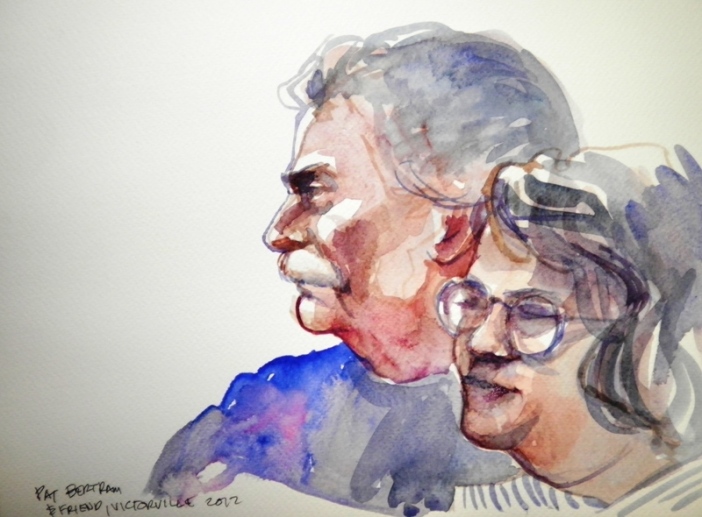 One Response to “The Denizens of Route 66”